A Drive in the Country

Today’s outing after Leilani’s nap was a drive through the countryside, which is more of an adult activity. The weather has been nice for so long that the views were a bit hazy, but we won’t complain: 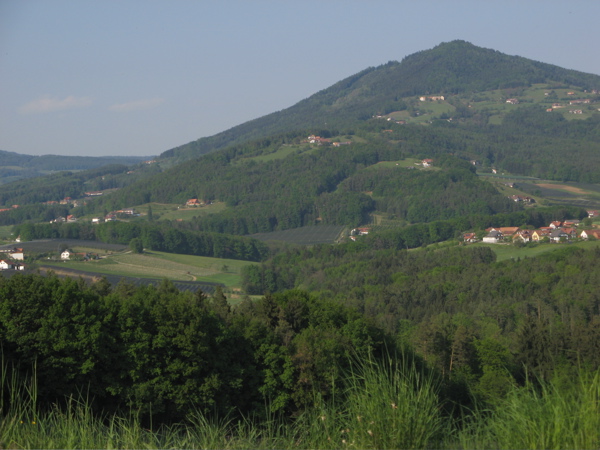 The small villages are very pretty, especially when we find an old wooden farmhouse: 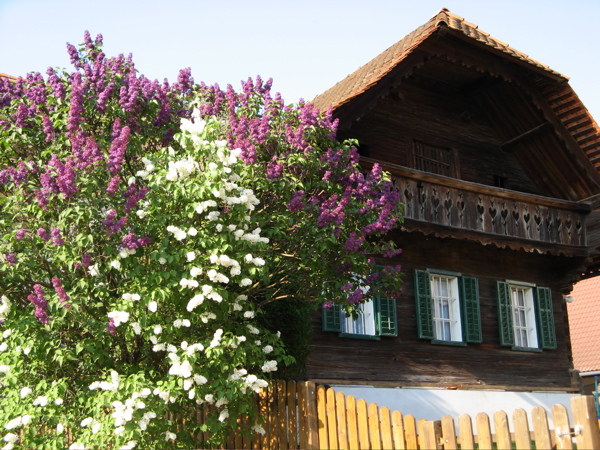 We drove along the Steirische ÄpfelStrasse (Steirmark region Apple Road) which effectively runs through miles and miles of apple orchards. Fruit products are a big export in this region because the weather tends to be relatively warm and sunny. Most orchards are now dwarf trees under rows of netting, but we found some old-fashioned trees in bloom: 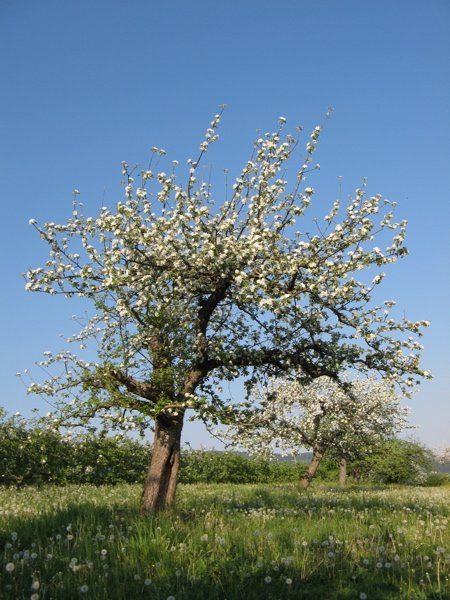 After the parents had their fill of sightseeing, we had to stop and let the baby out of the car seat. The town of Puch had a picturesque church, a swing for Leilani, and lots of flowers for her to smell (and for her parents to film and photograph): 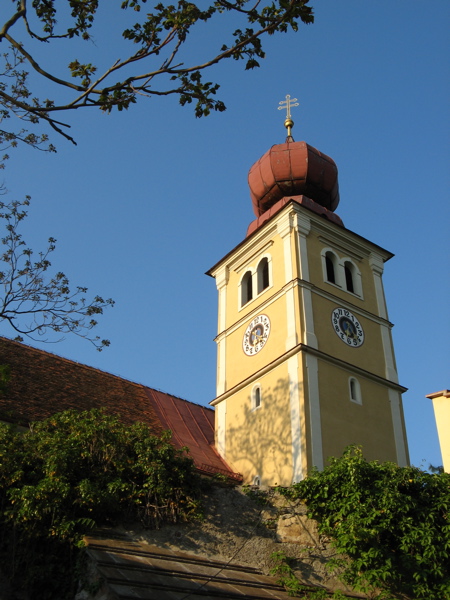 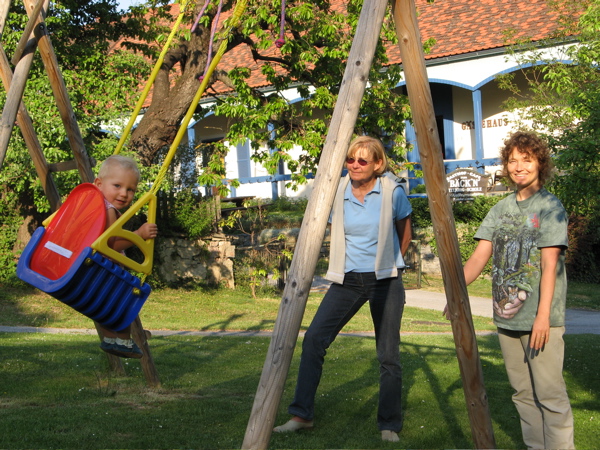 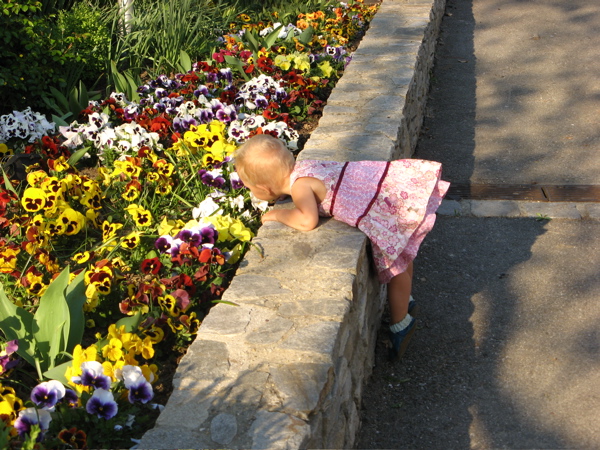 Leilani is really starting to show interest in shoes. She likes to pick them out and try them on, eventhough she can’t really put any on by herself. When her friends came over back home, they sometimes get attached to them like toys (“MINE”) and we have to remind them to share.

I took this photo just before we left on vacation. I was thinking we won’t be seeing cute little shoes at our doorstep like this forever: 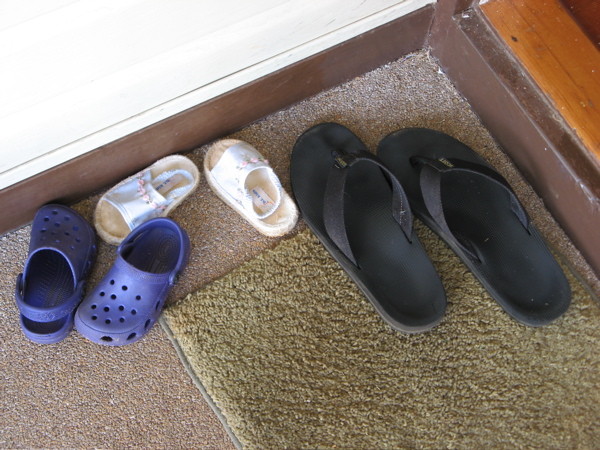 But since most adult shoes laying around in Hawaii are slippahs (flip-flops), she never really tried them on. Now that we’re on vacation with only our closed shoes, she finds them laying around and can’t resist playing with them. A few times now she got them on and took a few steps: 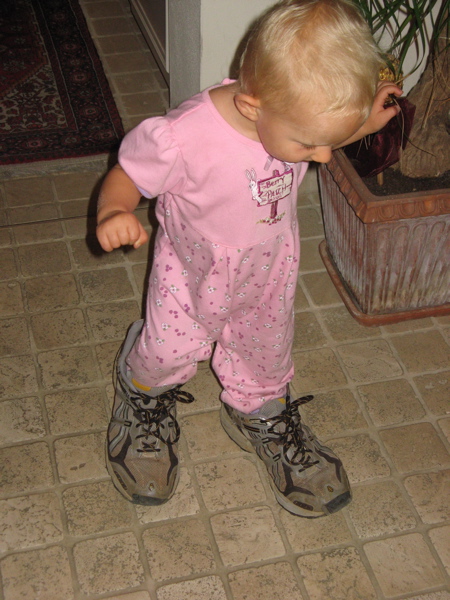 A Walk in the Woods

Due to the jet-lag, Leilani has been waking up at night and taking very long naps. But yesterday, she woke up in time so that she (and Mommy) could go with Opa to walk the dog Lara. Over hill and dale, and through the stream, she really loved the Austrian forest. 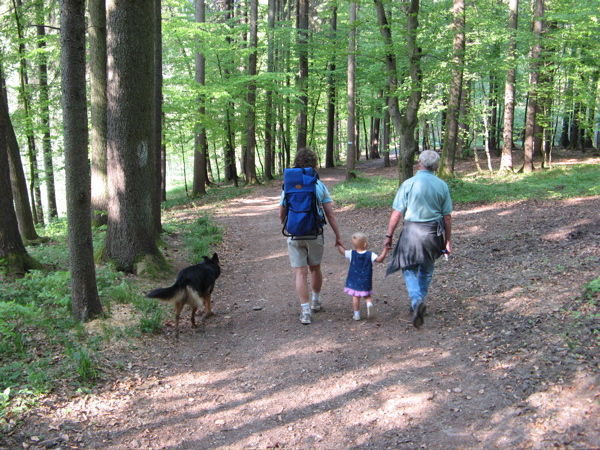 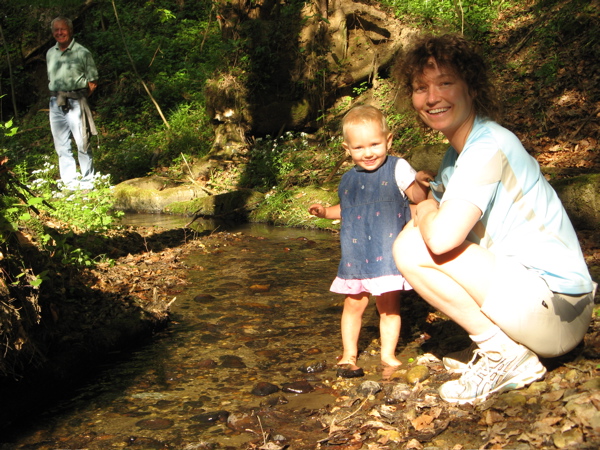 Opa (Gerd) taught her to blow dandelion seeds, which she now loves to do. She called them “bubbles” for a while. The first few times, she got her mouth too close and some seeds stuck to her tongue, so she made some funny faces trying to spit them out. When she got frustrated, she just shook the dandelion, and the seeds flew off … just like the bubbles. 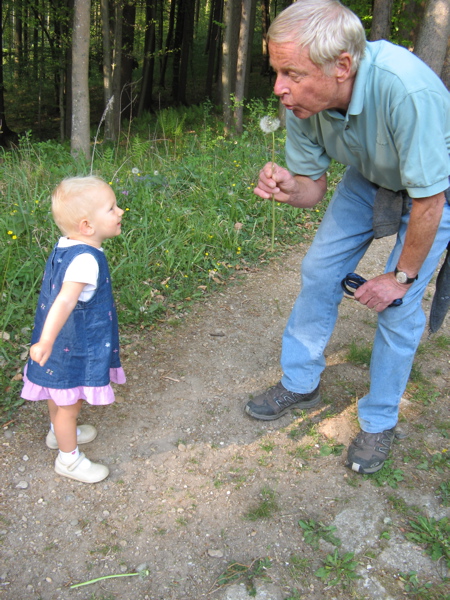 After the forest, we went to the duck and “nutria” pond. Nutria are not otters, scientifically they are myocastors, which is Greek for rat beavers, and they are commonly called coypu. They look like muskrats to me and not very cute at all. We came with bread to give them, and Leilani was rather scared when they just slid out of the water and waddled up to her. 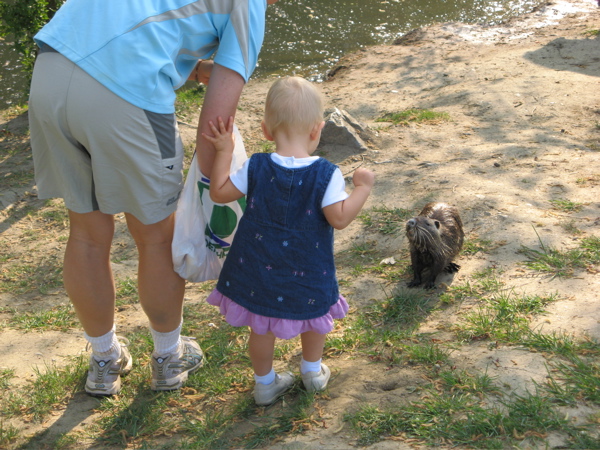 We are now in Austria, getting over our jet-lag and it’s really beautiful here, everything is green and flowery—spring is half over already. Trude’s garden is beautiful, but the cherry tree and the magnolia are done blooming already. 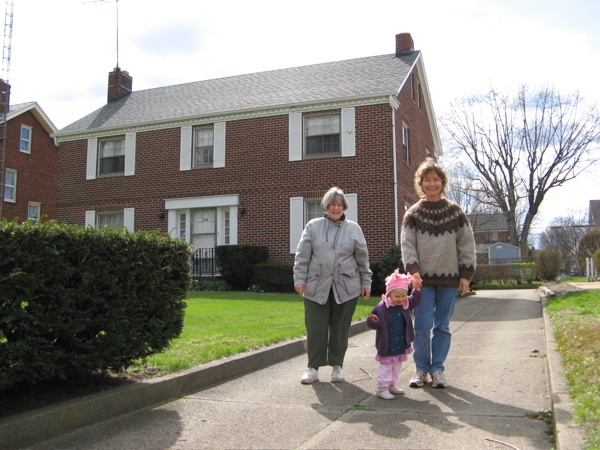 In Ohio we experienced early spring, the daffodils were in full bloom and the tulips just starting: 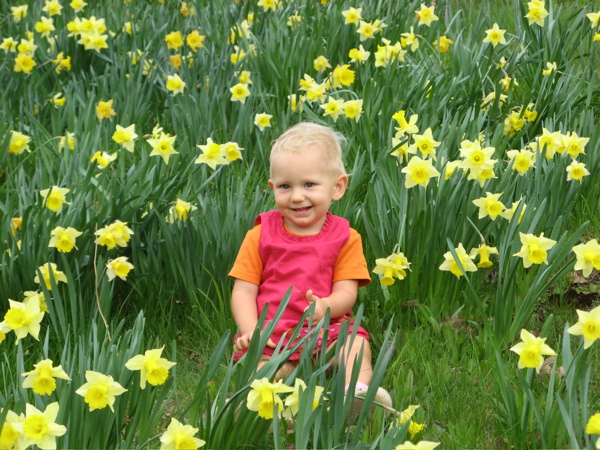 At the duck and geese pond near the McKinley Monument: 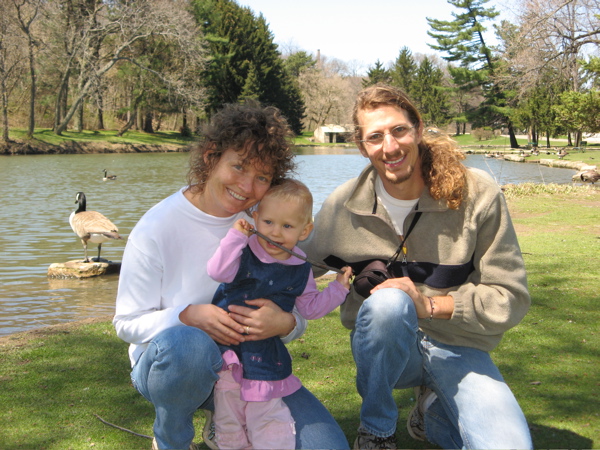 Leilani got to ride a “horsie” in Ohio, an Austrian Haflinger named Cookie. Thank you Carol and Jerry! 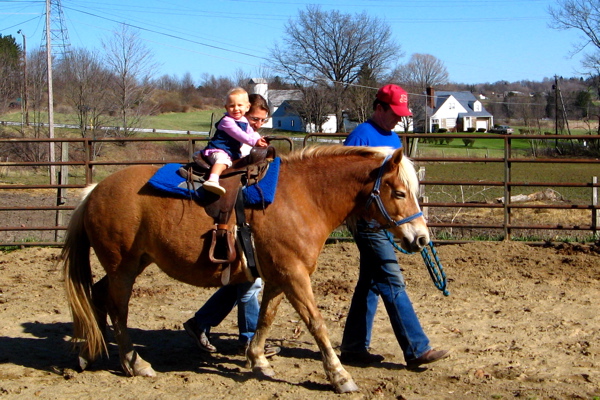 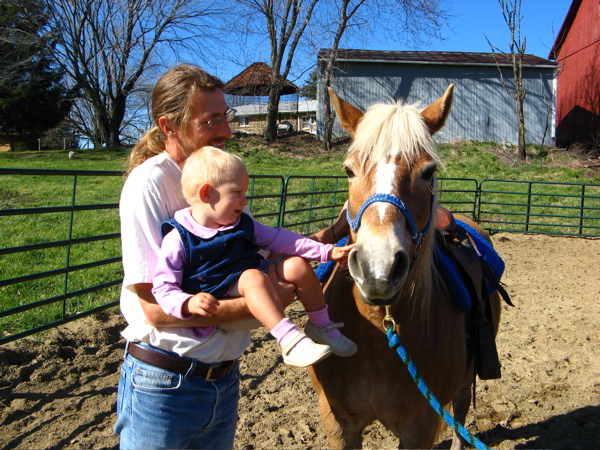 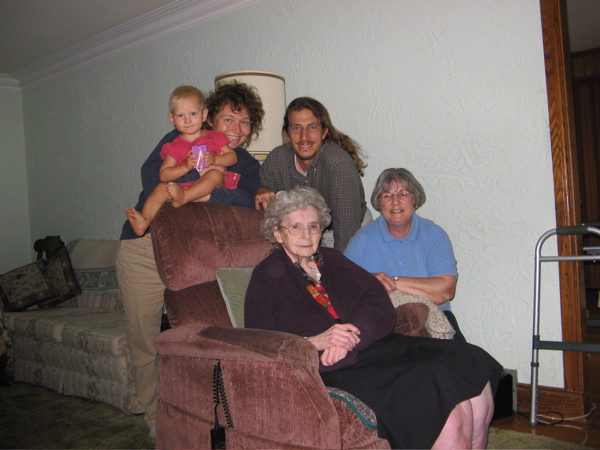 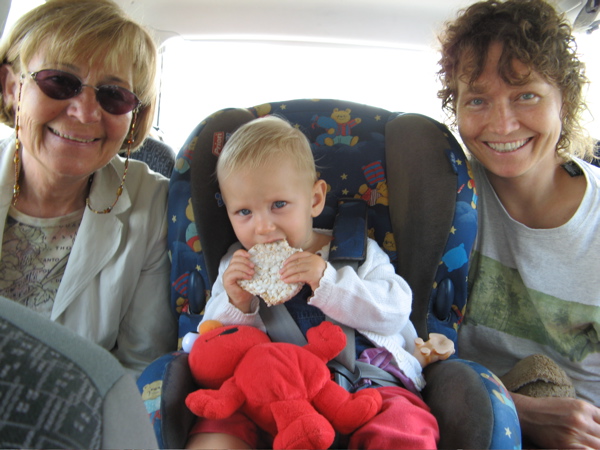 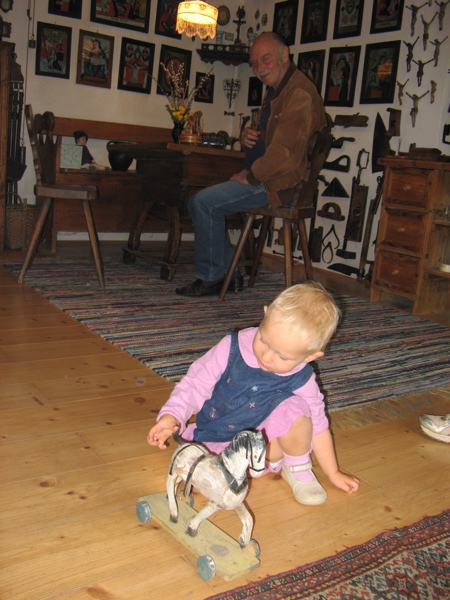 Today Leilani got vaccinated – on the way to the clinic I explained to her she’d get an “Owie” or “Booboo” and she needed to be brave. It took almost all of the way there to answer all “Whys”

…”Poor Leilani, you’ll get a booboo” “No booboo” – “The uncle doctor needs to give you a booboo.” “Why?” “So you won’t get sick” “Jaya Booboo?” “Yes Jaya also got vaccinated and a booboo. She was very brave, did not cry at all” “Jaya. Booboo. Brave” (pointing to her leg) “Booboo? Why?””So you won’t get sick” “Why?” “Sick is a big ouwie. Uncle doctor poking you is just a little ouwie” and so on. After a while it got old and she requested “Sing Mommy.”

In the waiting room she was very good, but inside the treatment room, whatever the nurse wanted her to do made her afraid like stepping on the scale, or taking temperature, but I could really see how hard she was working on being brave. When the nurse finally came with the syringe I told her now it was going to hurt a little, and she needed to be brave like Jaya and herself the last time she was vaccinated – and she was. She was so relieved when it was over and she got a Bugs Bunny band aid which she treasured (even showed it to Andy when he got home).

I cheered her and told her how brave she was, the nurse then told her she could have a sticker and let her pick “Just one” from a big bucket. Of course Leilani picked two – both Bratz stickers of all things. “Just one Leilani” “Why?” “You can have just one” (checking out if the answer matters…) “Why?” “Because there is just one sticker for every child” “Why?” “So that everyone can have one. We need to share” (Keyword here :-) Leilani put the blue sticker back and kept the pink one, said “Tat Yu. Up. Home.” (Thank You. Pick me up and let’s go home) and off we went.

Andy adds: I took Leilani back to Lihue the following day for shopping, and when we got near in the car, she started saying something I could not figure out. When I turned around to look at her, she was pointing to her leg (where she was vaccinated) and I realized she was saying “Bugs Bunny.” Since she seemed to be saying it with a little anxiety, I reassured her that there would be no ouwie today, just shopping (but I didn’t confuse her by saying “Daddy Mastercard ouwie”). I did look for the Bugs Bunny band-aids, but ended up with Hello Kitty ones (kitten + pink). You would not believe how many kids’ band-aids they make, all with the latest animated movie characters, none of which looked cute or even remotely pretty.