Mikey came home 1/2 hour ago! He ate 2 cans of catfood, groomed his fur, let himself be petted a little and left again.

Leilani and I had gone out to call him 1/2 an hour earlier, walked all the way around the big field with some catfood and kept calling him, after a recommendation that Andy got from a “catlady”. It worked, he heard us and smelled the food and came home. 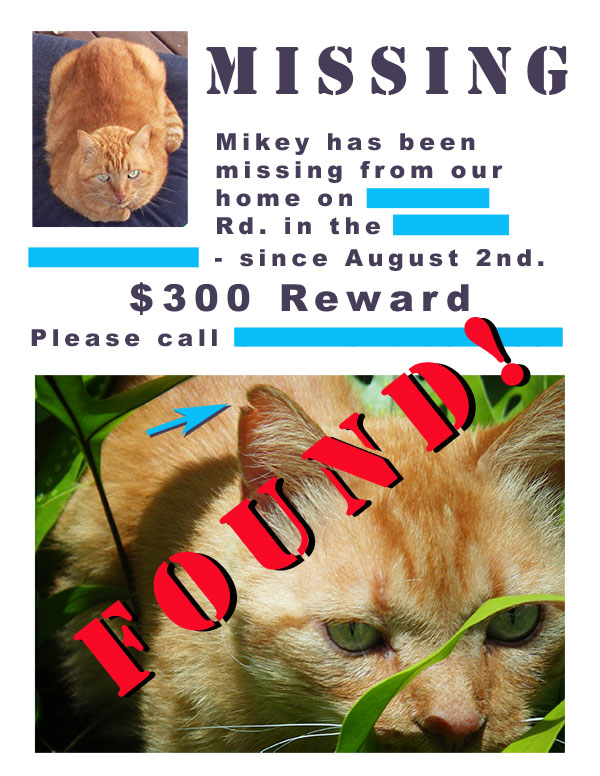 Last weekend we went camping. We had planned a weekend with friends, but ended up by ourselves, which was nice too for a change. (Except for the feeling guilty part about probably having spread the virus that got Leilani so sick 2 weeks ago )
We did 2 nice hikes, Leilani loved hiking, camping and the wildlife (just rats and chickens, all good for chasing).

On Sunday, Carey and Raya came to meet us, but we didn’t get to do a hike with them. First the trail had brambles, then it was blocked by fallen branches, then it rained. Instead we went to the Waimea brewpub, and had really greasy (but tasty) snacks. Leilani was extra cranky and also peed while sitting on my lap – which made me extra cranky. We picked up a sick young bird, that we intended to nurse back to health, but it had died by the next day. I lied to Leilani and said it had flown off.

Look at all that camping stuff: 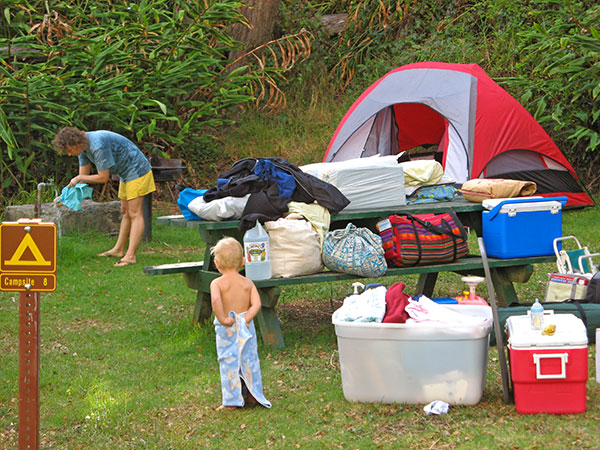 A pretty valley on an unused dirt road: 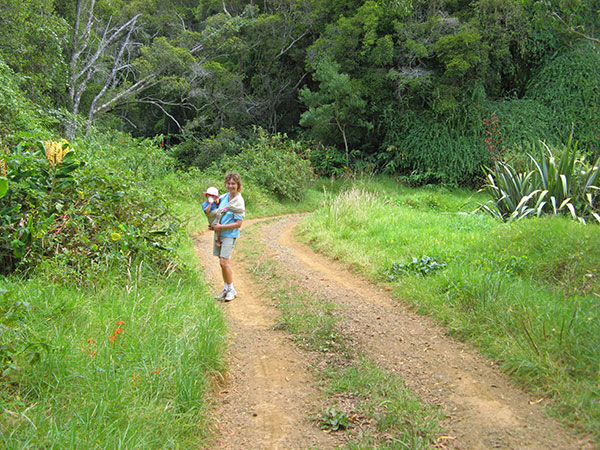 Camping on the edge of the forest: 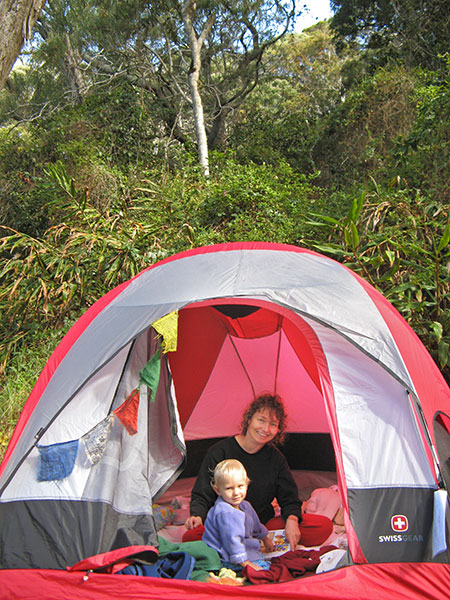 Hanalei 2 weekends ago (last weekend too, but no pictures yet): 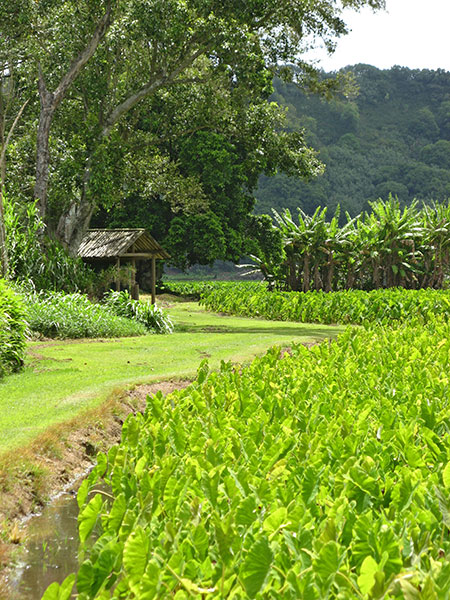 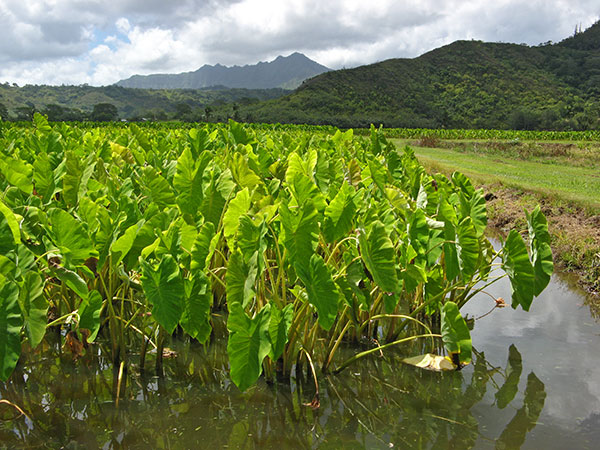 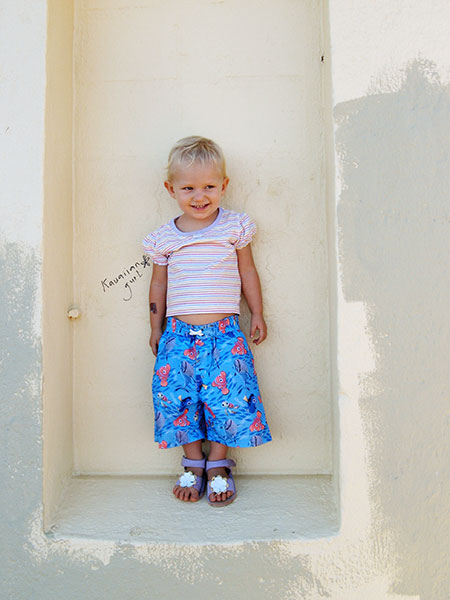 Kiko, hurricane and other sad news

Our poor little Kiko got run over by a car last night, 10 days after our Mikey dissapeared. I am very sad, Andy takes it a little better, and Leilani was more affected by Mikey not being there than by Kiko’s death. I am not sure she understands the permanence of death. Actually I am quite sure she doesn’t.

We read up what to do with small children, and decided to treat her as a 2-3 year old, as she is way ahead in verbal and other development, so we involved her in the funeral and showed her the dead cat.

He was already in his “casket”, only the back of the head and the ears showed. She petted him and called out as if trying to wake him up, dangled a toy and tried to make him come out of the box, while I struggled to explain to her that dead means he can’t hear her and can’t see the toys. She then called for the “Uncle Doctor”, but again we had to explain to her that it was too late for the doctor.

Then she went to pick flowers, her “Heil-vendel” (Ger. Heil=heal, Lavendel=lavender) – she named the Lavender this because whenever she is sick or upset she has to be carried to this lavender plant, and it makes her feel better instantly. Usually while doing this we sing “Heile Heile Segen, morgen gibt es Regen, Uebermorgen Sonnenschein, und dem Kind wird besser sein” (Heal, heal, blessings, tomorrow it’s gonna rain, the next day the sun comes out and the child will be better) and she started singing that song while we were crying at the grave.

She threw her flowers into the grave after a little prompting, and when Andy started to close the hole with shovels full of dirt she picked up a few dirtclots and threw them in, and then yelled “Bye bye Kiko, upstairs, come Mommy, comme Daddy” and except for twice really briefly has not mentioned him since.

There is absolutely no news from Mikey, the catfood is untouched in the morning, there are no catfights going on in the neighborhood, and I pretty much lost hope there too. Andy is checking out the animal shelter today again. 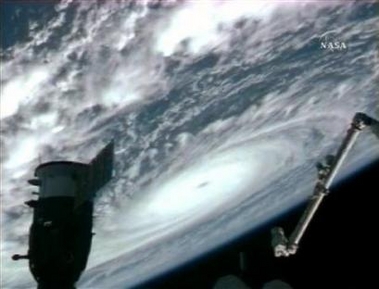 Hurricane Flossie (of all names…) is approaching fast, fortunatelly it just slowed down to a Category 3 hurricane (which is still pretty bad, see below… Iniki was a 4, Katarina a 5) in case you are interested the tracking is on wunderground

We will probably loose power on Wednesday, hopefully we will be hit by a strong storm and not by a hurricane. We have all food, water, and are working on tarping up and boxing the valuables. We have bought plywood sheets for 2 of the windows, we expect the new windows to hold, but will board up the old ones, and the big sliding glass door. If a strong hurricane hits us don’t expect us to be able to get in touch for a while, the last time it took 3 months until power was restored. Andy might have to fly to California for his job as soon as airtraffic is restored.

The definition of a Category 3 Hurricane on the Saffir-Simpson Hurricane Scale is:
Winds 111-130 mph (96-113 kt or 178-209 km/hr). Storm surge generally 9-12 ft above normal. Some structural damage to small residences and utility buildings with a minor amount of curtainwall failures. Damage to shrubbery and trees with foliage blown off trees and large trees blown down. Mobile homes and poorly constructed signs are destroyed. Low-lying escape routes are cut by rising water 3-5 hours before arrival of the center of the hurricane. Flooding near the coast destroys smaller structures with larger structures damaged by battering from floating debris. Terrain continuously lower than 5 ft above mean sea level may be flooded inland 8 miles (13 km) or more. Evacuation of low-lying residences with several blocks of the shoreline may be required. Hurricanes Jeanne and Ivan of 2004 were Category Three hurricanes when they made landfall in Florida and in Alabama, respectively.