As soon as the bells rang the kids ran out to pick up the gifts, and the parents ran to film the kids… 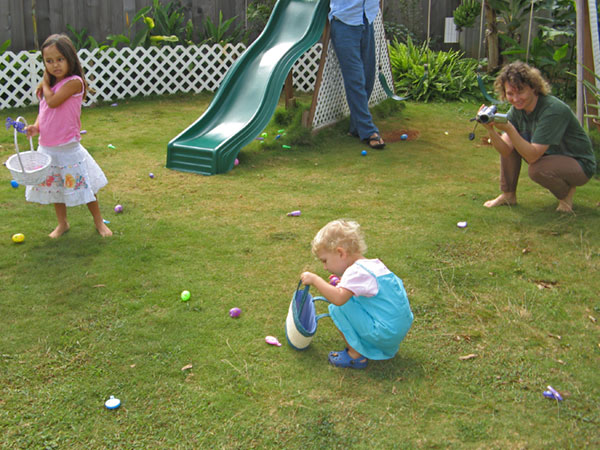 Leilani had a relatively small basket and stopped even before it was full to inspect her stuff and eat the candy—I guess she’s still cannot delay gratification. When I asked her she simply said “I have enough, I am done.” (But changed her mind when she heard that a Nemo egg had not yet been found and ran back to look some more) 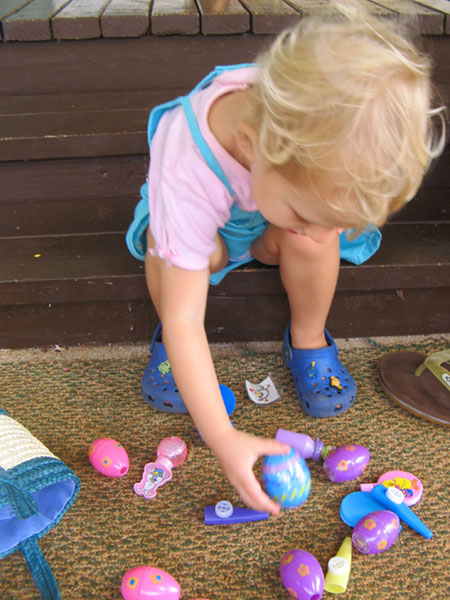 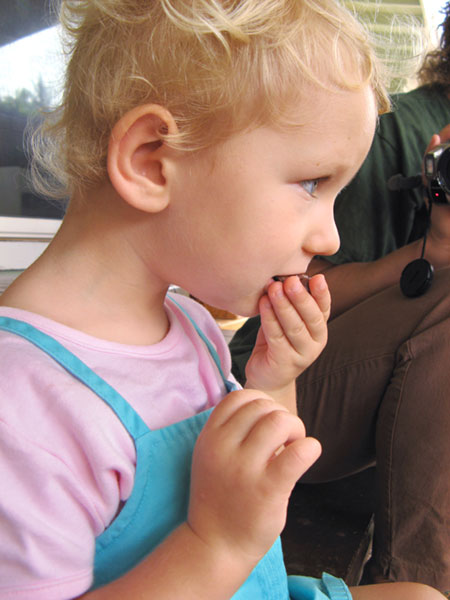 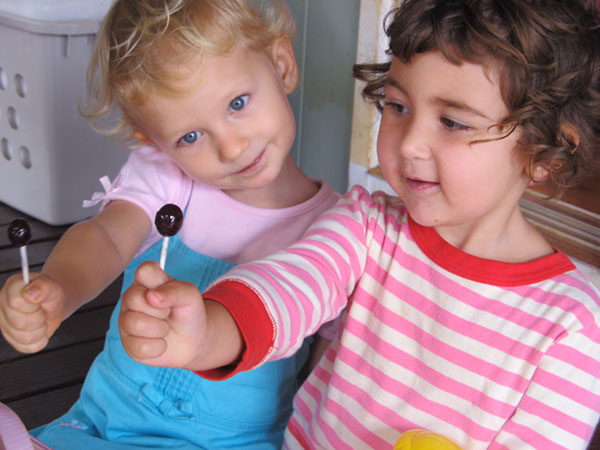 So, what did you find, Jaya? 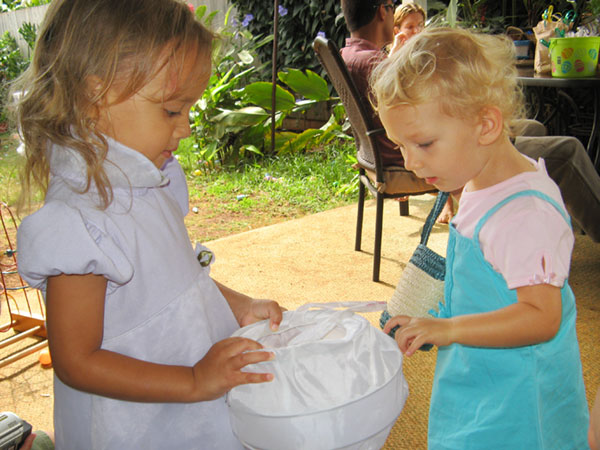 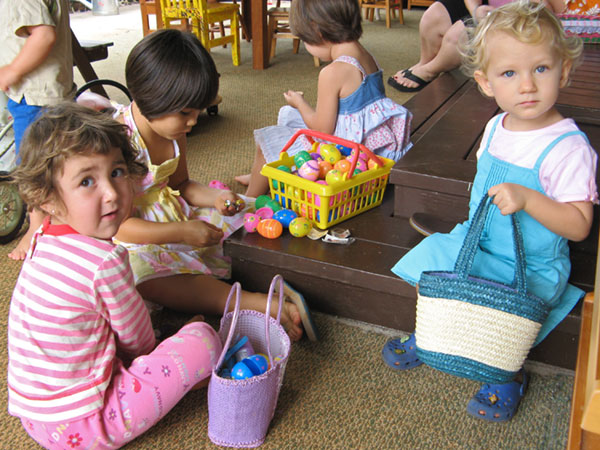 Joy is teaching them to act in a play—Leilani plays the birthday girl, and has quite a few lines to say. I’m going to film it and post it on the blog, it was too noisy during the one at the Easter party. 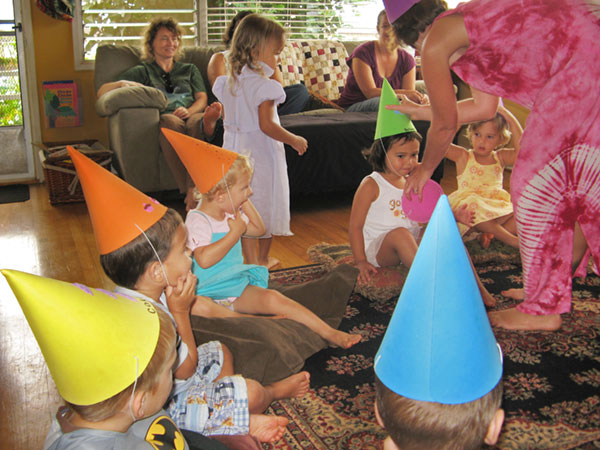 Written back on March 13th.

I had a nice afternoon with Leilani yesterday, although there was one of those uncertain parenting moments.

Mommy had put her to nap and needed to get some work done, so I took over. I managed to get her back to sleep twice—she now likes being in the rocking chair and listening to my French songs. When she finally woke up, she didn’t cry and walked out of the bedroom by herself to find me. After sitting on the potty, she suggested “let’s go to the park,” which suited me because I wanted to take her jogging in the stroller on the way there.

On the way there, she wanted to go see the “donkeys” she had heard one evening. We can sometimes hear cows in the fields near our house, but she knows what donkeys sound like and she said she could hear them. I was fairly sure it was just her imagination, so I played along with her. Since there are no donkeys in our neighborhood, we went to see the horses and feed them for 15 minutes. For once the horses came over to the fence to be fed grass I picked nearby, and she loved feeding them herself. Then I got my 30 minutes of jogging around the neighborhood done, and as promised we ended up at the playground.

When I took her to the potty after a while, we saw an 8-yr old boy walk out of the bathroom with the roll toilet paper. I didn’t think much of it until we saw the boy and all his friends wrapping one of their bikes with the paper and I thought they were playing a joke on an unlucky friend. When I was 5, the big kids on my street took my Big Wheel and ripped the stickers off, which was traumatizing—but I couldn’t bring myself to yell at these kids.

Next, one of the kids had a lighter and lit the paper around a handlebar, while the owner of the bike rode around and the others watched. The wind from riding around made the fire spread, but without making big dangerous flames. So while I was even more tempted to intervene, I had to admit the kids were being rather ingenious. I had never done something like that when I was that age, but I was starting to wish I had thought of it.

I was aware that Leilani was sitting with me watching all this, but I just couldn’t think of what to do. On the one hand, I shouldn’t let her watch dangerous pranks, but she was amused watching the boys, the bicycles and the fire, so it would be hard to drag her away to play elsewhere. I was watching because I was both interested in what they were doing, seeing what kids these days do, and as the only adult around, trying to keep an eye out for safety. So I did lecture Leilani about the danger of fire and big boys on bikes, but I felt I couldn’t really make the kids stop, they would just go elsewhere and or stand up to me.

In the end, I did call out to them and tell them to stop making fire on the painted surface of the basketball courts because that would ruin it. They accepted this and moved to the grass for the big finale: lighting the paper under the seat of the bike and pedaling around. I have to admit this looked more dangerous and more impressive. I was worried the kid’s polyester shorts could melt, but the paper burned quickly and by riding around, the flames never touched the boy.

At one point, a small piece of burning paper blew onto the court, and Leilani stood up and tried to yell something about no fire on the court, trying to repeat what I had said. They didn’t hear her, but at least I felt she understood how fooling around could be both fun but dangerous and destructive. After that, the boys gave up and eventually biked off their separate ways. I never got the impression they were bad kids, just adventurous. Of course, it made me wonder in what ways will Leilani be adventurous at that age—hopefully she will have forgotten about this specific prank.

As Dr. Seuss famously asks at the end of The Cat in the Hat: “Well, what would you do?”

We went on 2 easter egg hunts – I can’t find the photos of the first one at Aunty Joy’s, Leilani’s preschool, I suspect Andy must have the memory card, and will post them later.

Here are the photos of the second one, that we had today in the morning in our yard. When I woke up Leilani, I whispered “The easter bunny was here” and she jumped out of bed like I have never seen before and ran to the door.
I thought she wanted to look for gifts right away and tried to get her to dress, but she wanted to see the bunny – she would not calm down until I let her open the door and peek out and see that the bunny was already gone… we got dressed orderly, and went into the bathroom and within 5 minutes (!!!! her regular morning routine is about 30 minutes until the start of breakfast, and that is only because I hurry her along every step…) we were out in the yard. There Leilani took her time, and opened the plastic eggs at the spot, tasted the candy, and unwrapped the presents. She also read most books – to find all her nests took more than an hour that way. 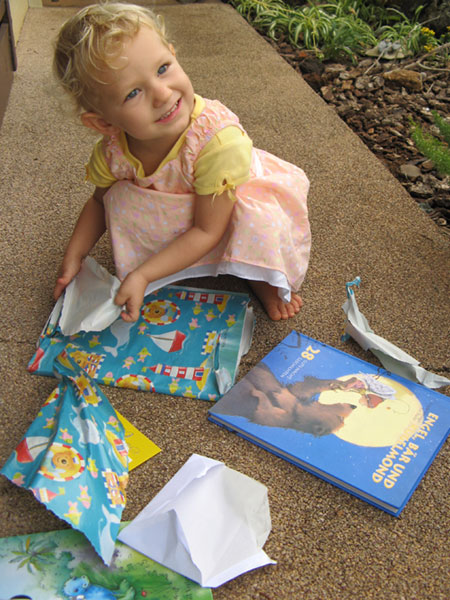 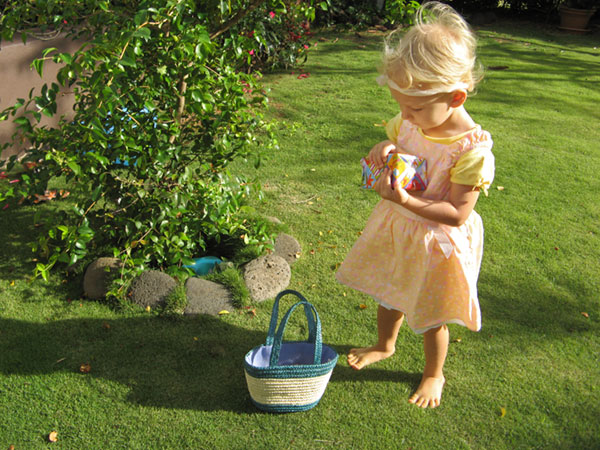 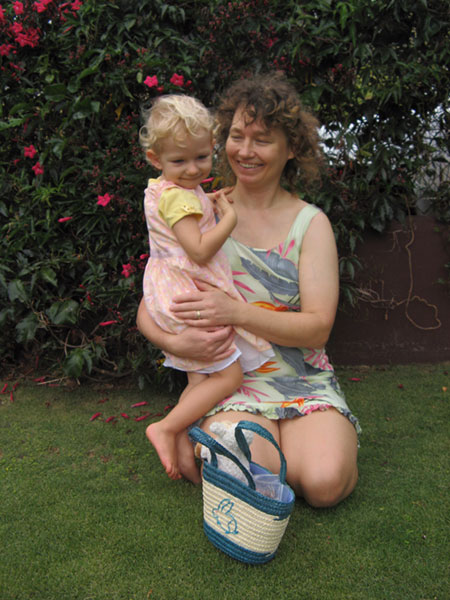 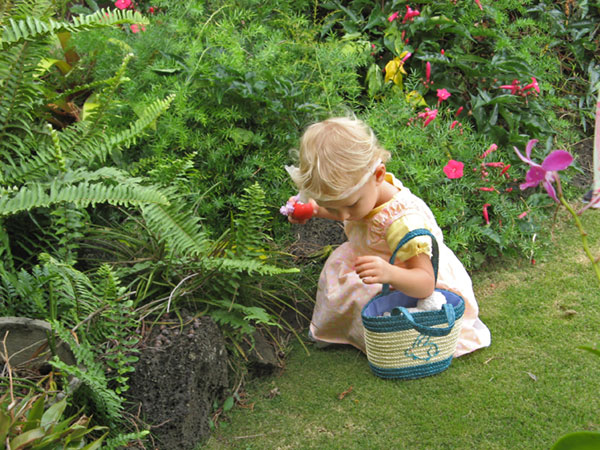 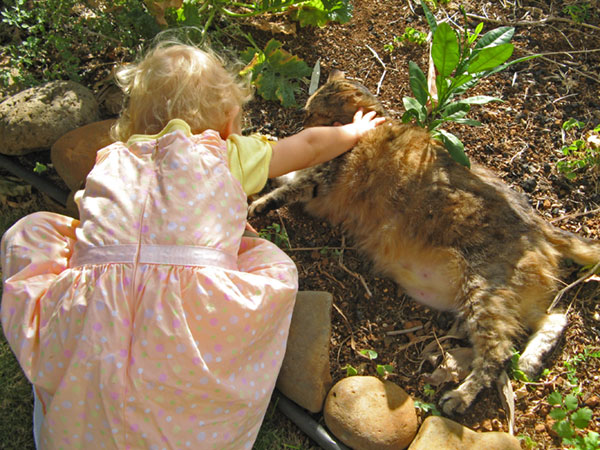 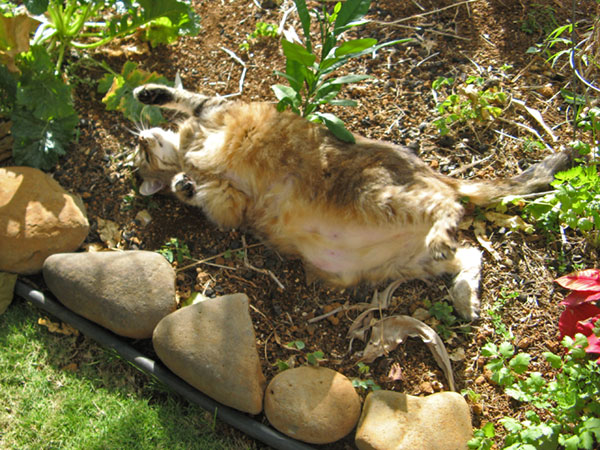 We dyed Easter eggs – Leilani helped. To decorate them, we put Easter stickers on them. Then I noticed that these were the 20-year-old stickers (maybe 30) that my brother and I used to have, and that Leilani inherited recently. Notice they are made in the USA, in Framingham, Massachusetts, not far from where we lived there. I like the retro look of the decorations, that might even be trendy. 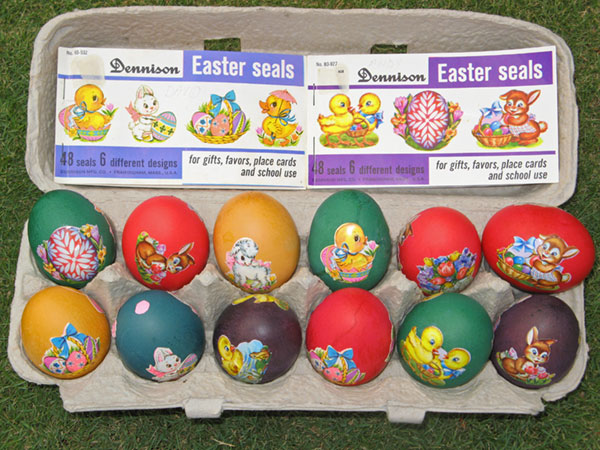 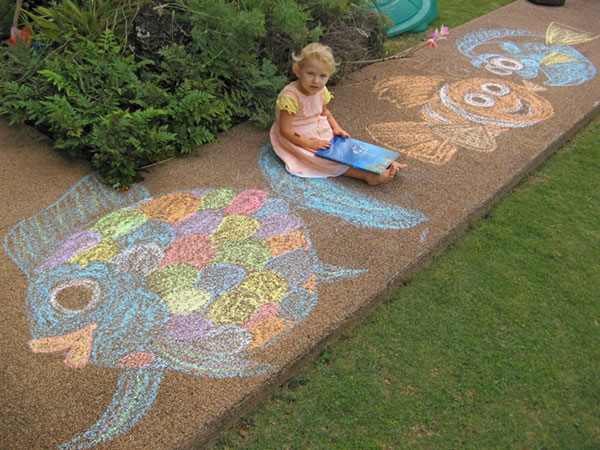 She really likes Rudy, she always decorates him, and kisses him, and when we have visitors introduces him 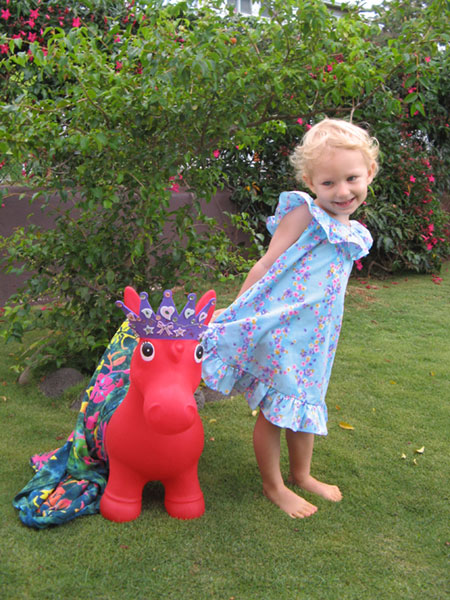 Big Island Lava, Mikey and Leilani and other Photos

I spend a day on the Big Island and met with Serge, and also saw the new lava flow 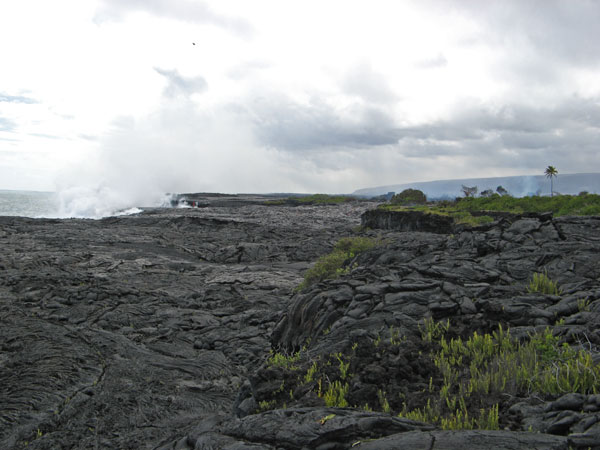 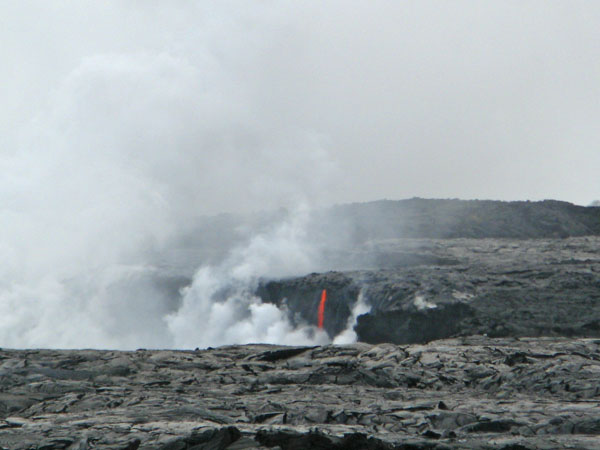 Mikey has completely forgiven us, and sleeps in the bed again. Actually Leilani sleeps in her own bed more and more often now :-) 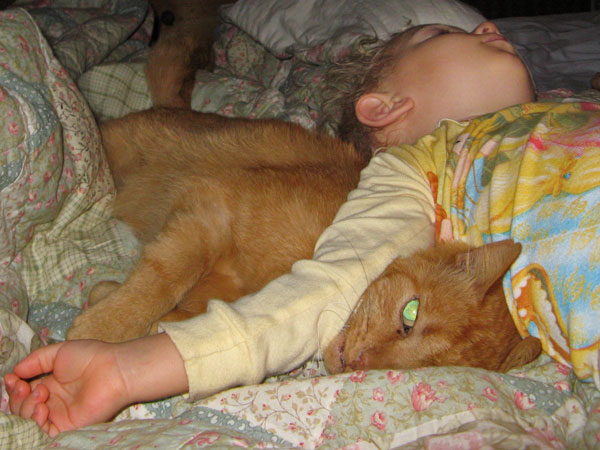 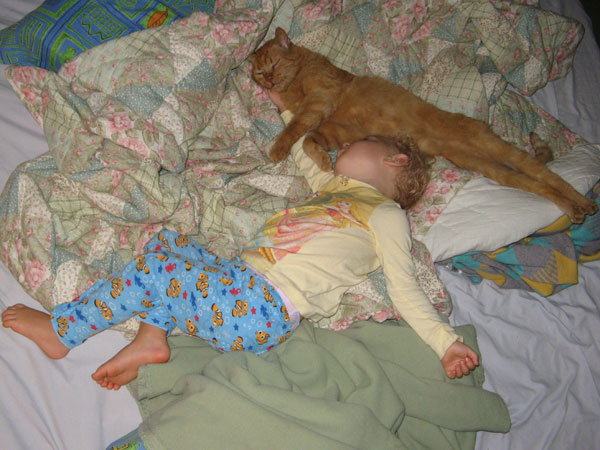 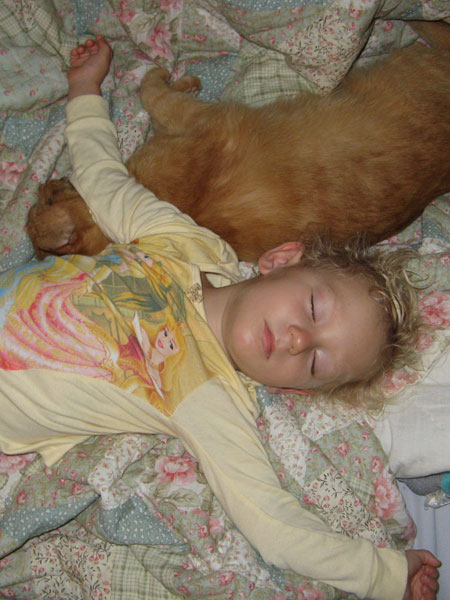 She did not build this all by herself… 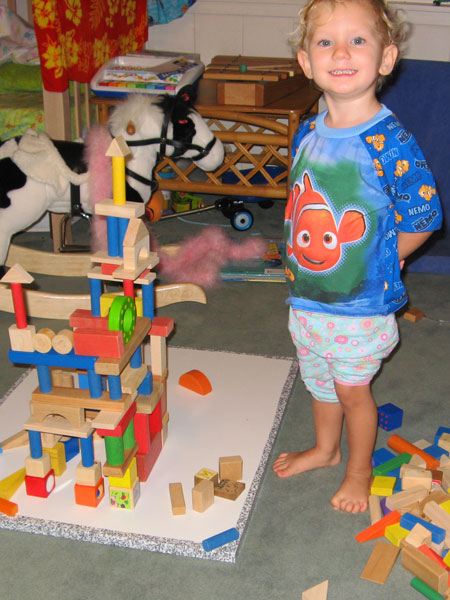 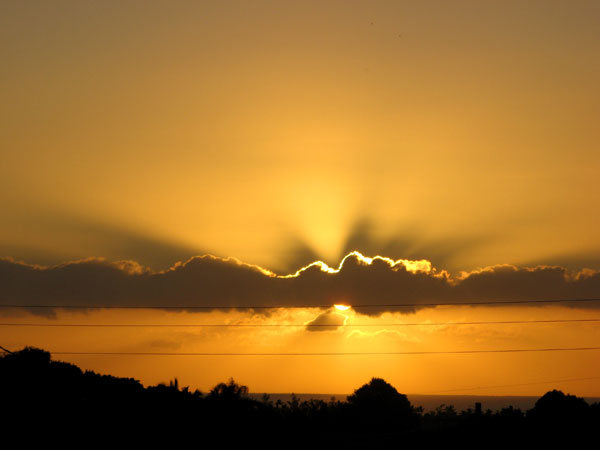 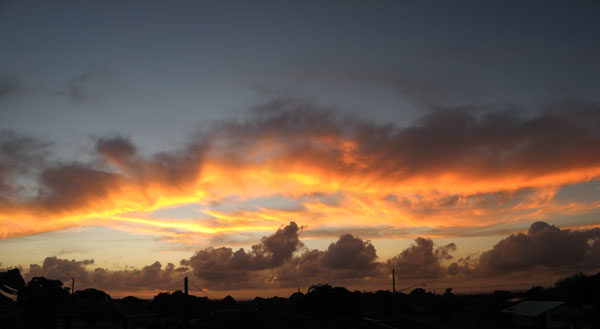 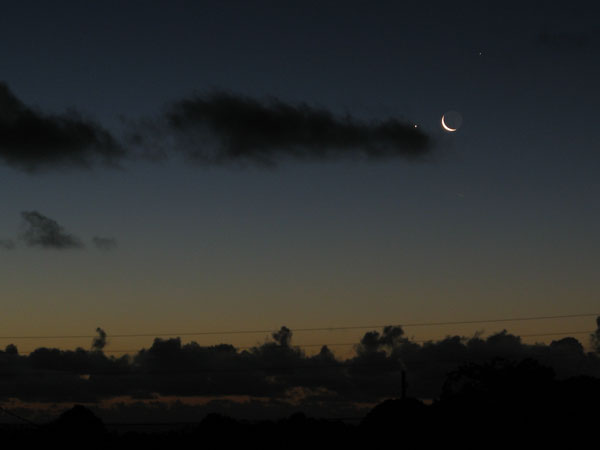 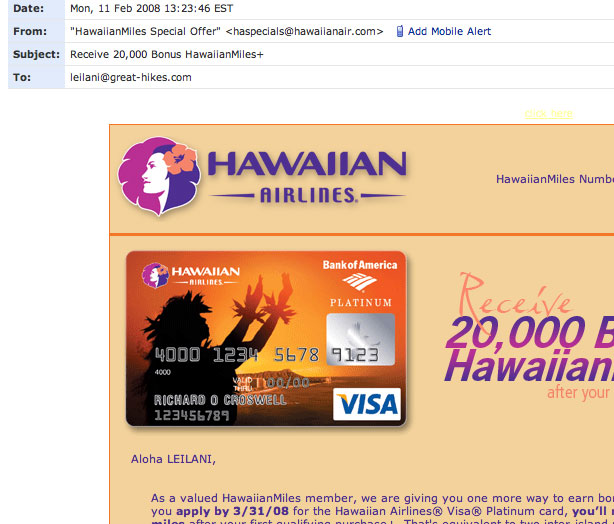 I have been working crazy hours and not blogging much… I worked on a new site Life Beyond Death and informed many of my customers that I might be working in a regular job* , and that increased my workload quite a bit…

Leilani is not grounded anymore!!! She agreed to wash her hair, and did not cry a bit when we actually did it. We celebrated by having a big piece of chocolate before breakfast, a lollipop and a popsicle with breakfast and watching Cinderella for about 3 hours…

We found a great babysitter Tammy, a grandma who misses her grandkids, youngest one same age as Leilani. Leilani loves her and her friend and roommate Sandy and her dog Lea. We left her there 2 evenings, and are planing to see a musical, South Pacific Kauai next week.

*no I probably won’t, still have not heard back from them