I am shuffling websites around, and many of them will go down (and probably not come back up on their own)

If you notice (before me) that the blog is down I’d appreciate a phone call or at least an email.

I explained our monetary reward system on this blog before. The regular reward is still a quarter, but… there are also a few high price items now.

When we were in Austria and Andy was not, I wanted to have an evening with my family. It was bedtime. I offered 2 Euros to Leilani for going to bed by herself. Seeing her reluctant expression my mom quickly raised to 5 Euros. Leilani demanded my iPhone (loaded with prime / unheard audiobooks) on top of it and the bedtime routine took less 10 minutes for me, instead of an hour. We repeated this once in Austria for the same price.

Friday, Andy and I had dinner guests without kids here, and afterwards we played the game Kaua’i-opoly (as in Monopoly, only Kaua’i-themed). Again, I offered the 5 – just Dollars instead of Euros, Leilani demanded the iphone, and went to brush her teeth. (Andy was a bit shocked at the price when he found out).

The next morning Leilani decided she wanted to donate the money for the defenders of wildlife to save the wolves. As usual I matched her donations 2:1 and happily wrote the check for $15. 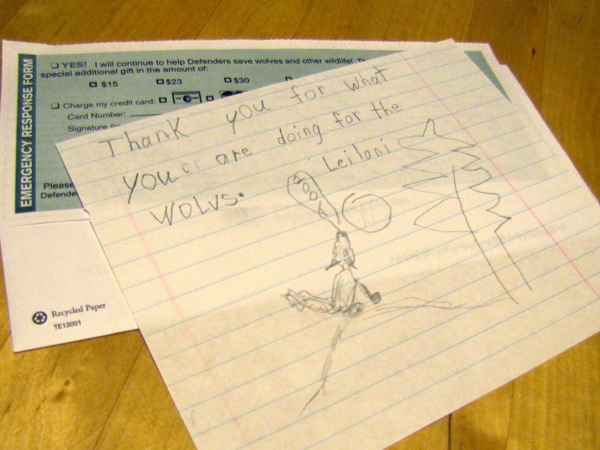 Generally people are very accepting, but I know some questions my judgement. I just found this article.

Summer Larsen, who teaches the fourth grade at Declo Elementary, is being criticized for the way she allowed students to behave after asking them to assess their reading goals. The students came up with incentives to accomplish the goals. Students who met their reading goals would be allowed to draw on the faces of those who did not reach their goals. The students who fell short of their goals could choose to either skip recess or allow other students to draw on their faces. Of the 21 fourth-graders involved, nine did not meet the goals, six chose to be drawn on, and three chose to miss recess. Some of the students chose to draw goatees and mustaches on other students.

One parent said, “Not only was my son punished with bullying, but the other students were rewarded with bullying. They’re being taught that bullying is OK.”

Some parents didn’t have a problem with what happened. “I’m just one of many parents who stand totally behind Summer Larsen and her teaching methods and what she does. We think she is a wonderful teacher, and we want to see her stay at Declo for many years,” said Carla Christensen.

Not only do I think the punishment is absolutely inappropriate, how can they punish kids for not learning to read at the prescribed level. How can a teacher of so many years still believe all kids develop according to “no kid left behind”* standardizations? How can they not realize some very intelligent kids just are a little behind in one area and see that they excel in another? Punish the kids for who they are, what they are, how they develop, their natural limitations?

In a culture that allows public shaming of school aged kids (standing at street corners with a sandwich sign “I am an idiot”… “I stole” … or worse), tries to teach creationism as an alternative to, or even instead of evolution, allows corporal punishment in schools that leaves “welts and bruises” this seems small by comparison, but it worries me that this seems to be what parents support and request.

* yes I know that’s supposed to be obsolete now, but it seems it’s still practiced.

What started as an email to parents about the “new and improved” crafts event turned into an un-mailable rant. I’ll keep it here for now. I’ll discuss it with Leilani. I don’t dare to show the parents directly. I guess it could be viewed a bit passive aggressive to leave it here, but if you find it and see it I apologize, I mean it as a reminder for me and Leilani. I also think maybe I can word it in a way that’s I could still mail it, as we would really like to have these events again if not for…

Some of you remember my crafts evens. I know all the kids who were there do, because ever since they stopped, almost than a year ago they keep asking, when we’ll restart them.

I thought about it. What would it take?

1) Timing. I had one event where the first kid was picked up less than 1/2 hour than the last kid arrived. Kids were routinely 45 minutes late, this does not work for a 2 hour event. If I’d restart there would be a window of 30 minutes before the event (“playdate”) to drop of, and 5-10 minues late might be OK occasionally, but not more.

2) RSVPs: I had 2 events with more than 3 RSVPs where nobody showed up. I had 6 kids once when I expected 2. It does not work, because I need to set up. I need accurate and timely RSVPs.

3) Clean up. Frequently parents interrupted the cleanup by whisking the kids away, or distracting me. I need the glue off the floor and the paint off the brushes before they dry, it’s also not good for the kids to be left off the hook. Same for the potlucks or shared dinners that sometimes, spontaneously happened afterwards. I loved them. I did not enjoy having the entire cleanup for a party of 10 people between me and Andy half the time.

4) Sharing / helping / reciprocating: It was a free event and the materials were free to cheap, and I always paid for them myself. But it would be nice if I had a little help. Somebody has to go to the store for just that one bottle of green paint or glue, not always me. Often the setup was a bit of work, and it would have been fun to have an adult help for 15 minutes or 1/2 an hour. Also, Leilani loves to go to other people’s houses, for play dates, sleepovers, baking, gardening as well.

5) Siblings / younger kids: The crafts work for an age range. Younger kids are more work, because they dump their smoothie into the beads more frequently, and because they need a lot of extra explanation, and they get frustrated if they can not do certain tasks, or have to do alternative crafts. It takes too much time away from the kids I actually want to work with.

I stopped there, before the list was finished. I knew each of the parents tried at least in one or two of the list-items above, or had good reasons why they couldn’t or would do what they did.

I assumed things could not change. I hope I get more optimistic and try :-)

France and Austria: The Movie