Leilani is healthy again, after a fever that lasted 3 days. It made her cranky, but she had no other symptoms… Yesterday she felt so well already, that we decided to see the Nutcracker, performed by the children of the Kaua’i Academy of Dance and Gymnastics. Two of Chloe’s sisters were in the production and had sold us the tickets. They performed it in May because, sadly, the director’s father died during the production in November.

I guess you all know Andy and me, so you won’t be surprised that for a show supposed to start at 4:00 pm, we decided to go at 3:10 pm. Both of us finished a shower in record time, fed and diapered the baby, put on her cutest dress, stressed a bit, rushed to Lihue, and arrived plenty early Kauai time; it actually started at 4:25.

We thought it would be a good way to teach Leilani to be good and quiet through a performance. Since we weren’t attached to seeing the performance, we sat next to the door and were prepared to take her out. Children’s ballet atracts a lot of families, there must have been 20 babies and toddlers. Two screamed their head off through the initial anouncements until the director asked nicely for them to be taken out. Leilani slept until the music came on and then watched and listened, interested until a few minutes before the intermission. She was most fussy in the dark before the curtains opened and during the clapping and cheering. Whenever she started babbling we’d whisper for her to please be quiet. We took her for a short walk, and the 2nd half was not as easy, and we had to take her out 3 times, but for just a minute at a time. She realized that she was excluded because of her noise, immediately quieted down, and seemed eager to go back in. Even though we had to stand and hold her the whole second half, she saw more of the show than many toddlers who had to be taken out. 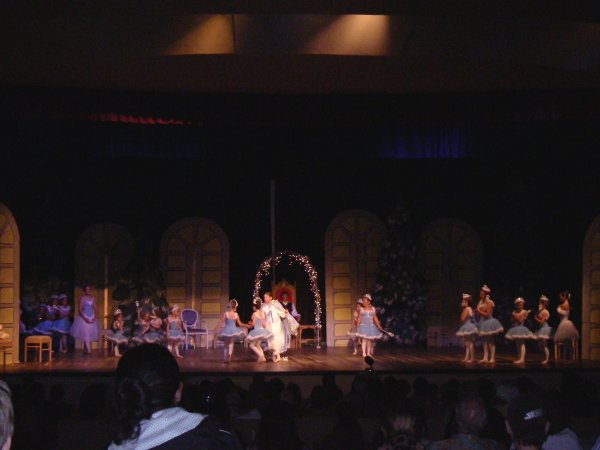 I was pretty surprised to see the children all dance flat-footed, I still remember all the pain from my early ballet lessons (I bet I could still walk on the points in ballet shoes). There was one teen-age dancer who was really good, and from the program we learned she is going to the San Francisco Ballet Academy.

Leilani has been eating solids – much to the dismay of her naturopathic pediatrician – for almost 4 weeks. We started giving them to her because she sits with us at the dinner table, sees us eat, reaches for our food, and seems to really, really want to eat like the big people. I can’t deny our cats food, even if they have just been fed, much less the baby.

Her preferred food is banana, she wants it in anything. Least preferred are papaya and flax seed, and rice cereal and spinach range in the middle. She really wants mangos and tomatoes because they are so colorful and shiny, but can’t have for a while because they are possible allergens. We let her taste both, thinking she would not like the strong flavors, but it did not discourage her at all. Avocado was the first food we gave her, and she stopped eating it after a few days, and we will re-introduce it soon. 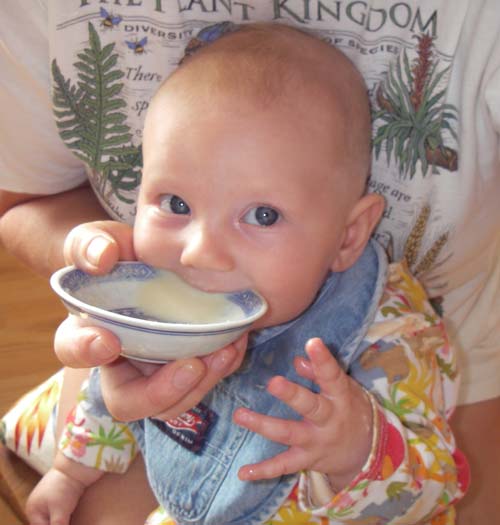 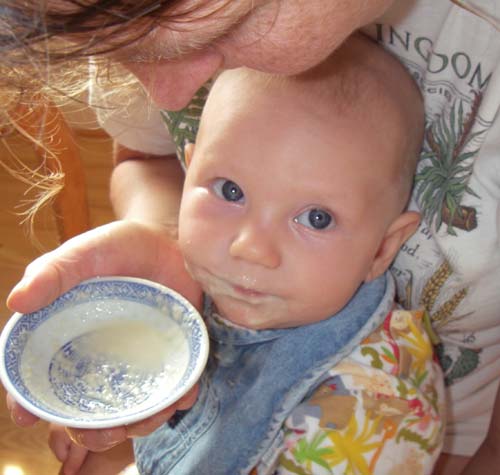 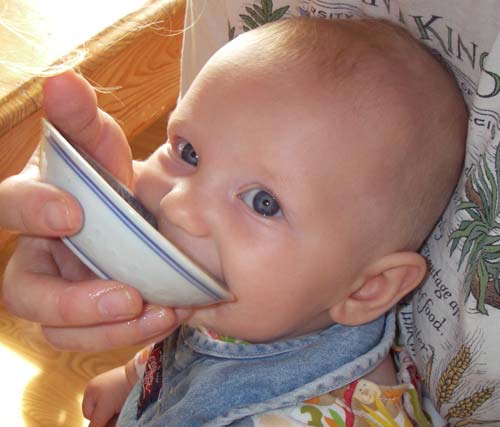 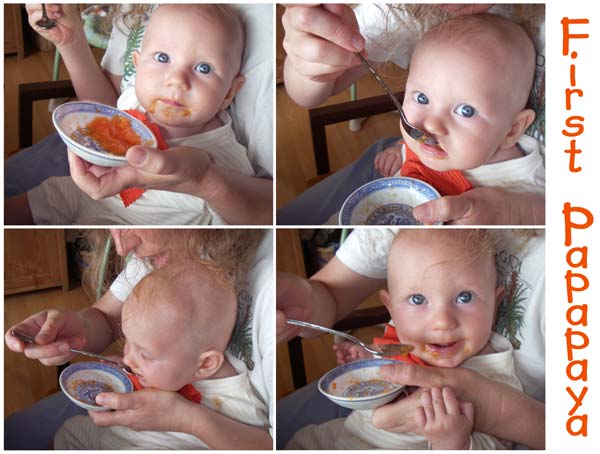 Recently we took Leilani parachuting. Thanks Julian for the great idea btw… 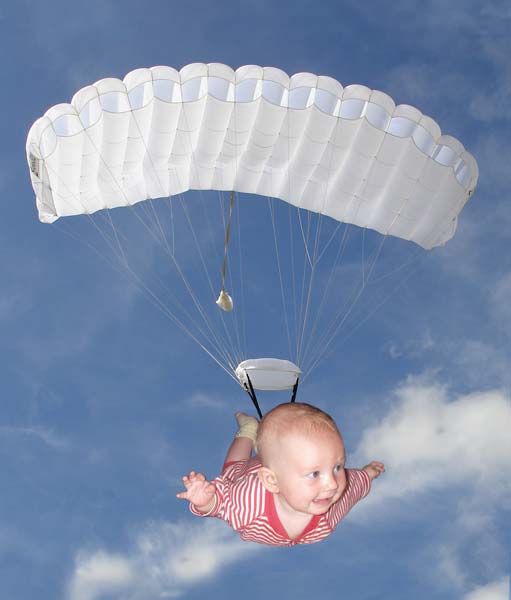 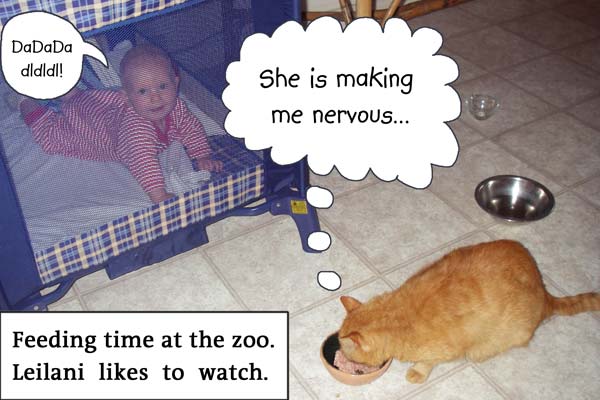 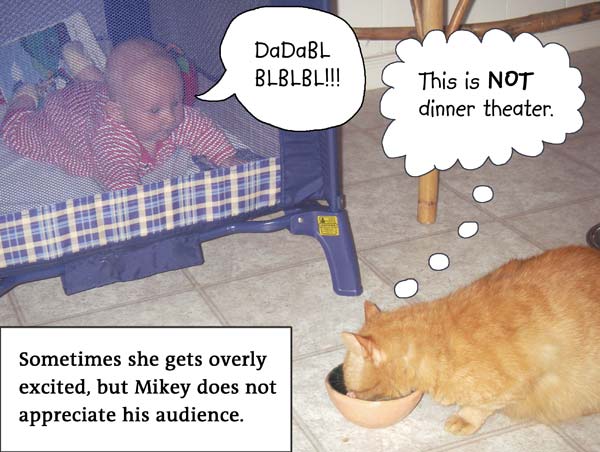 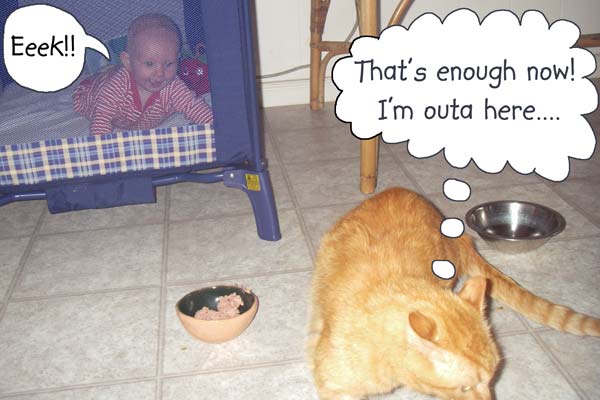 Leilani has a babysitter! Chloe is 15 years old, had 3 younger siblings and has been a babysitter since she was 13. She comes by 2-3 times a week, while we are home for about 6h total. Leilani likes her a lot, and Mommy gets some time off! Once they know each other better Andy and I will take one evening a week of and go on a date together, and I’ll get one afternoon to blog (or clean the house). We expose Leilani to a lot of people especially kids now and hope that the fear of strangers does not set in, or at least not as strongly as in some babies. 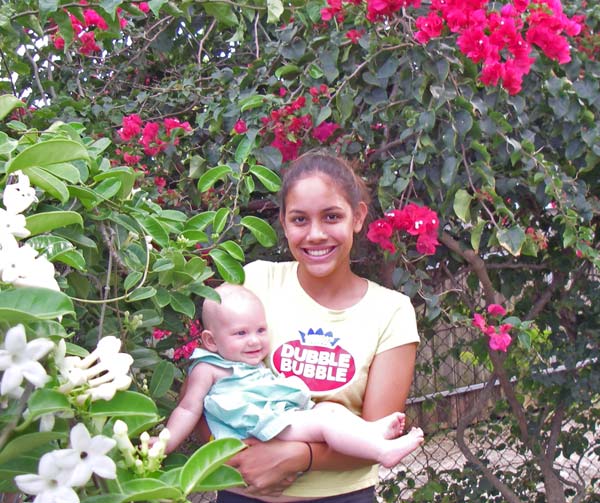