Today she had 2 naps again – I woke her up from both of them, the earlier one inadvertently, I was carrying her and had to sit down, the later one on purpose , because it was 5pm already and I feared she wanted to start her nightsleep. She went to bed at almost 8pm.

Well I guess nobody complains if a baby sleeps to much, but I worry a little. I’ll call Dr Ancharski tomorrow, even though otherwise she does not seem sick, just fussier and moodier than usually. I think it is from the vaccination she got on Wednesday, hopefully she is over it by now.

Leilani’s second pair of teeth were the top two in front, but they were hard to see because she rarely moved her upper lip high enough. Now they are long enough to see when she smiles, and I’ve been trying to get a picture of them. Here they are finally, today at the beach (I apologize to my subjects for these bad portraits, the light at noon at the beach is so strong and vertical): 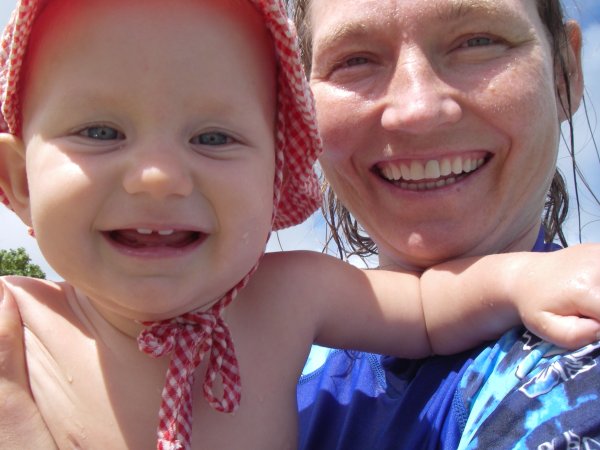 And sometimes, when she smiles real big, we can see all four teeth. 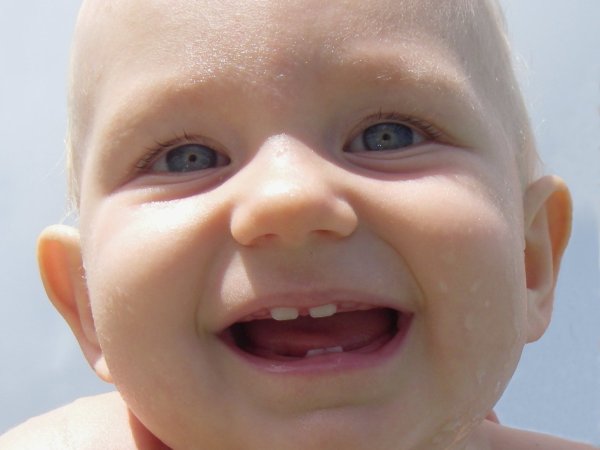 In that last photo, you can see the next two teeth just starting to break the gums on either side of the top-front two. So that may be the only photo with four teeth.

After baby-proofing all the kitchen cupboards, Leilani would watch us open them and want to check them out. Now that she can crawl, she would see us open a cupboard, crawl over, and we’d have to close it in her face. Then she would pull at the door, and we were afraid she would learn that the baby latches aren’t very strong, and then she could get into all the cupboards.

We’d read that the solution is to make a cupboard for the baby and teach her to open that one. So we emptied out the bottom shelf of our pantry cupboard and put some of her toys in there. She figured out how to open it and crawl inside, so we try to rotate the toys to keep her interested. She once got into the plastic yogurt containers and seemed to enjoy them, so we put them in for her, too. And finally, Mommy had a really good idea to keep her busy: she put some of her favorite puffed cereal inside a little see through plastic container.

After playing in her cupboard several times, Leilani knows the puffs are always in there, and she goes looking for them. Now that she knows to look for them, we put them all the way in the back. So now she has to rummage a lot to find them, and she throws a lot of stuff out on the floor. Once she finds the puffs, she plays with the container a while before getting frustrated, and then one of us opens it for her (and refills it later). We tried showing her how to open the plastic container, but she can’t do it yet–but we did find teeth marks on it: 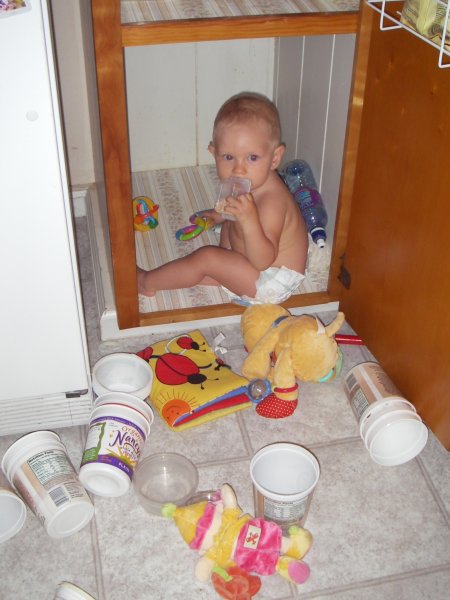 So we have this theory about food. Baby food in jars tastes like adult food in cans, usually bland or overcooked. The fact that parents feed their babies one or two jars per meal fails to develop their tastes and ability to appreciate other foods, hence picky eaters who only want to eat hot dogs or macaroni & cheese. So we introduced many different foods to Leilani, and tried to make them fresh for her, so that she would have a taste for a variety of good foods. And for a while it looked like it was working, Leilani would eat 3-5 different foods per meal that we would change each time, and she would eat most of everything. She obviously had preferences, but we thought we had “won” and she would keep expanding her menu.

But then last week, she started refusing many foods, even ones she had eaten before. All she wanted was oatmeal mush and avocado (thank goodness for avocados). Maybe we introduced too many new foods too rapidly recently, and she was “protesting.” So when Mommy wanted to give her broccoli, I thought there was no chance she would eat it. We had given it to her before, it was one of those foods she seemed to eat out of “politeness” (because we put it on the spoon in front of her mouth).

To my surprise, Leilani loved the broccoli this time. I even had to cut up more for her. Maybe the fact that we made it a finger food helped: 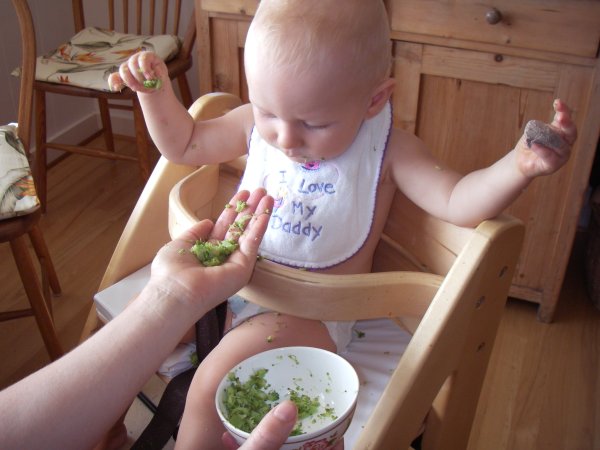 PS: The bandage on her finger was from the blood test at her 9-month check-up. They drew blood for several minutes through a prick, which made her scream her head off. I don’t know if she’ll ever want to go back to the clinic.

2 weeks ago we had a potluck at our house. 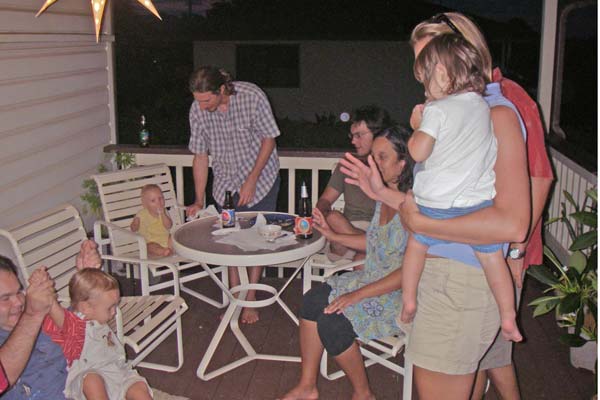 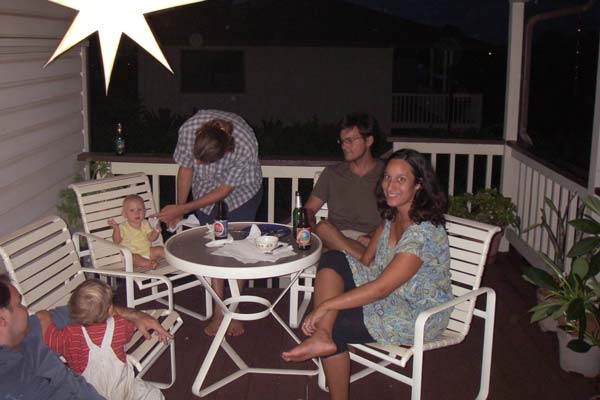 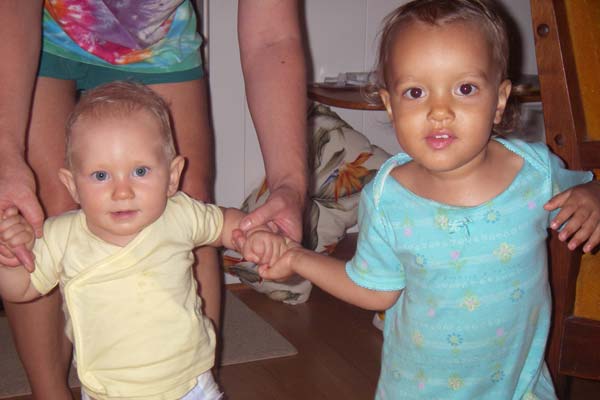 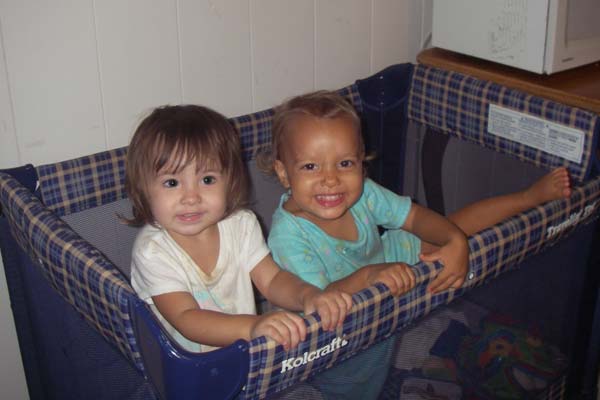