Last Saturday (3/17) we walked from the Small Town Cafe to Kealia and back. Afterwards we spent some time relaxing at the beach and had lunch at the Olympic Cafe. 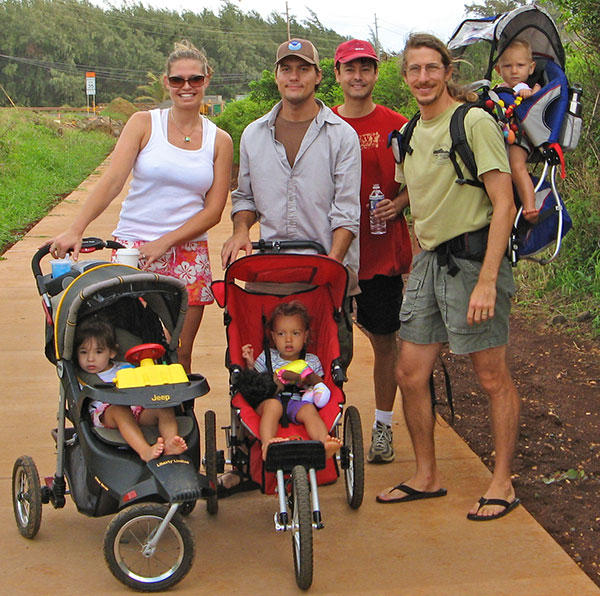 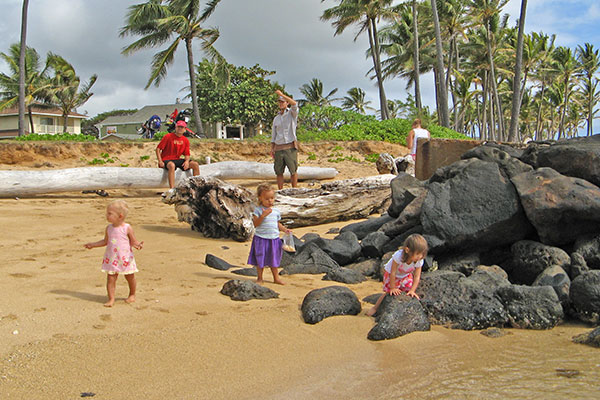 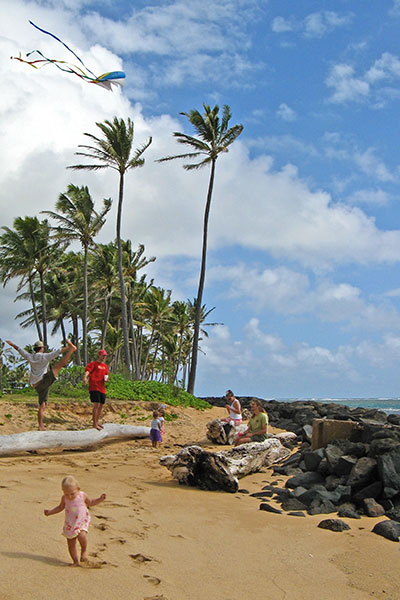 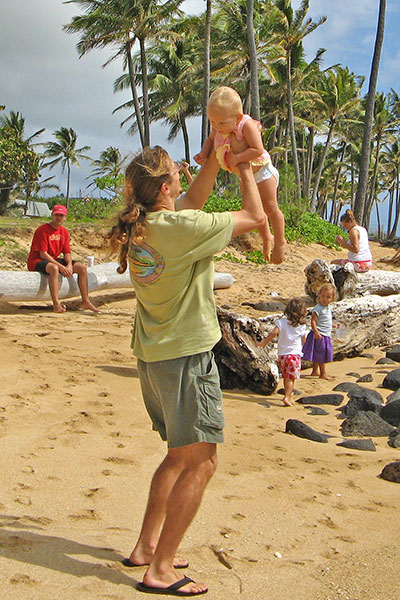 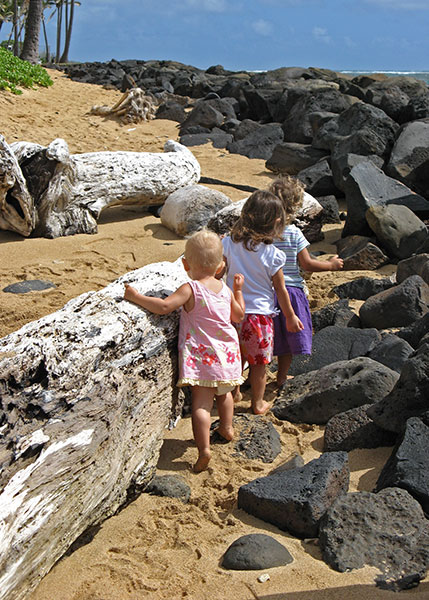 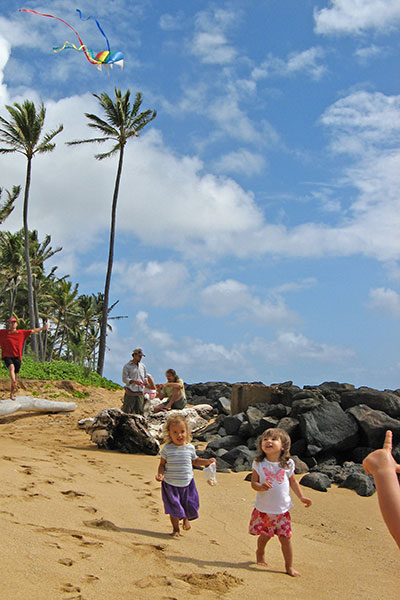 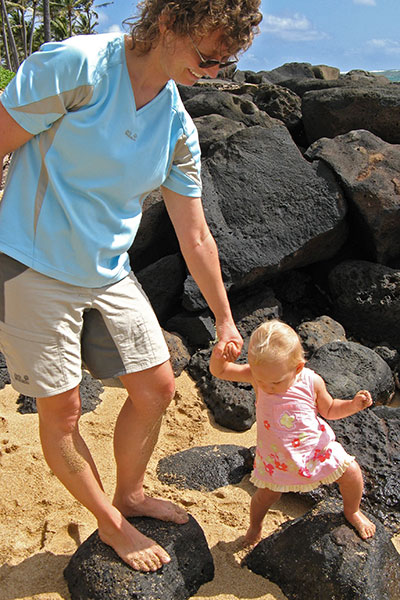 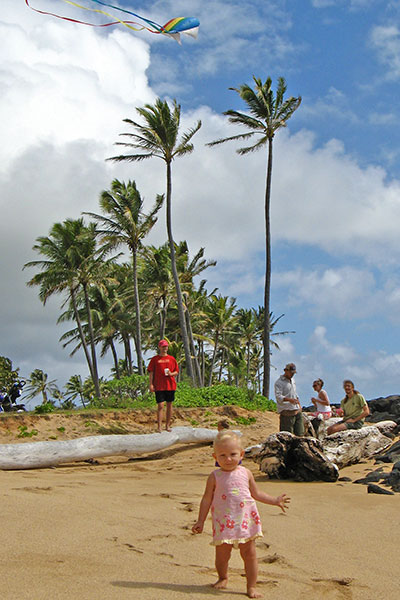 We didn’t take many Baby photos lately, Andy was in California for a while, and we forgot the camera a lot recently.

This one was taken hiking up Nounou from the west side (interior side). 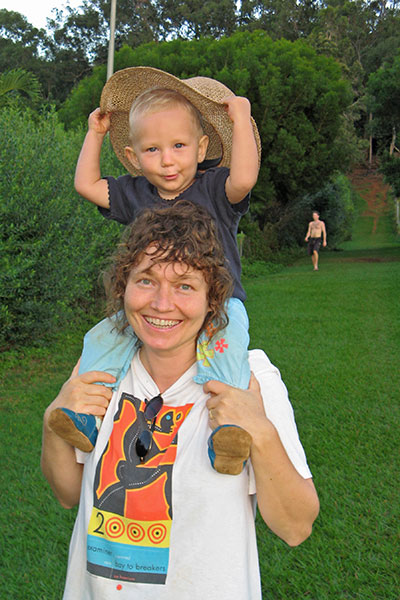 Leilani now really likes to go hiking, just yesterday, when it was going to the park time she pointed to the right direction, and said “Nounou. Nounou mountain.” I answered, yes she was right, Nounou was that way, and she answered “Hike Nounou”. She repeated “Hike Nounou” probably 10 more times, getting more and more excited while I was getting her ready and the backpack out. As soon as we left the house she switched phrases. “Maka. Maka off”. Maka is the little chained dog in the neighborhood that Leilani likes so much. So we took Maka along. After a while she wanted to walk herself, and walked probably 450feet (150 meters) only occasionally holding hands.

That photo was taken at the airport, as Andy was getting ready to leave for California. 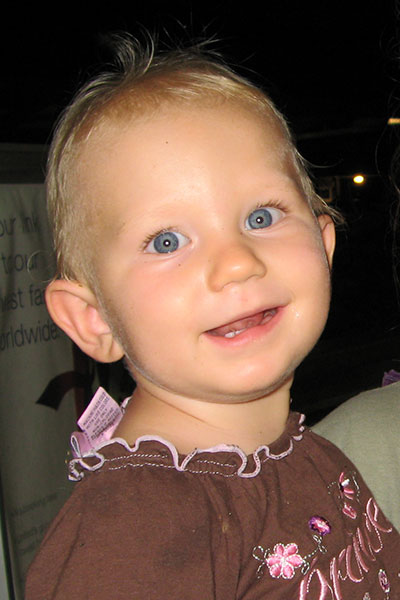 And this is another Hale Ao Ka Po (Sunrisehouse) sunrise… 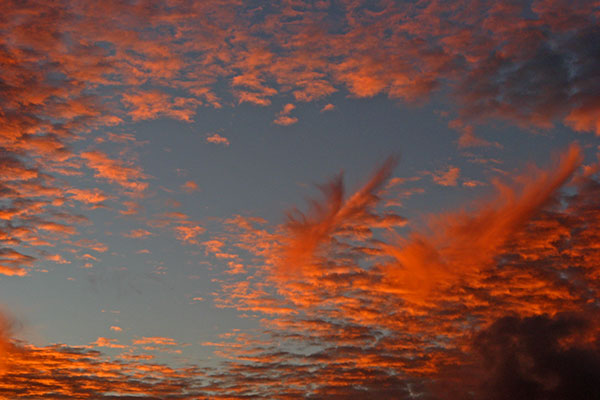 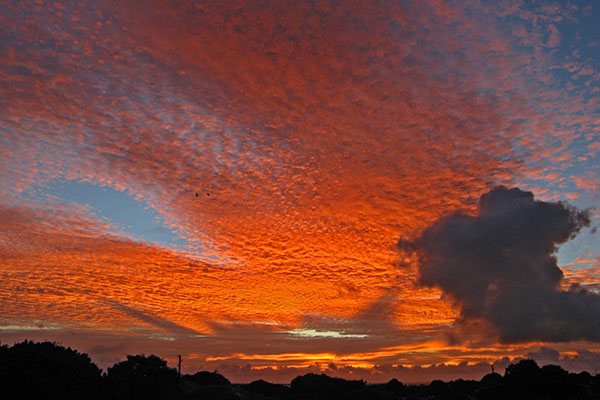 The wheels on the bus go round and round…

Leilani sings on this one. Unfortunately you have to listen to my singing too, but that’s the only way to motivate her to sing a song that also has words.

We looked at books, the first one called “The wheels on the bus” and illustrating the song of the same name, see pictures of birds and kites and cats (Katzi in german) additionally to the bus and what’s in it, have discussions about taking off the diaper… we go on to a “Rainbow Fish” book, with fish, puffers, shark and crabs, the next book is on whales, seals, turtles and other ocean creatures and then animals in general (lions, tiger, bird, monkey, snakes, bear, many many birdies…) point to the nose, ears and mouth on her doll, and in the end she demands “bounce”

We have not posted on language skills recently. Although Leilani still mostly uses one word to communicate her wants and needs, she says more sentences and phrases now, “Thank you” (which can also mean please), “Me too”, “All pau(finished)”, “Catch me” and “I know” are her favorites. I don’t keep track of her new words anymore, there are too many. Most letters she says well, biggest problems are “L” and “G” which is amazing to me, I thought all children had problems with “S” and “C”. She counts: “One, Two, Five”, I think that’s from the way Andy brushes her teeth – he counts to five (but doesn’t leave out the 3 and 4) for each jaw.

Leilani has been naming most animals correctly (if they are drawn well), so mouse has not been a problem for a long time, but yesterday Andy showed her a picture of 2 mice and asked what it was and she said “mice” – both mouse and mice she pronounces so clearly that there is no doubt. She also says “Maenner” (german for men).

Today she repeatetly named her body parts: “Eyes, ears, nose, mouth, teeth, hair, head, knees (she gets these wrong a lot, pointing anywhere on her legs or feet), feet, toes, belly, nakig (which means either naked or belly button depending on context). She then goes on to hitting herself and says “Hauen. Nicht Hauen” (german: hit, no hitting) and stroking her own hair, like one would pet a cat and says “Ei, Ei” (German babytalk for petting). I think she learns a lot from songs, at the playgroup they sing one that goes “Head, shoulders, knees and toes…. eyes and ears and mouth and nose…” and the adults and bigger children point to the appropriate part.