The biggest news is that we don’t have childcare at the moment. Poor Maureen had a death and severe sickness in the immediate family and decided not to come back from her vacation. It was very sudden for us, but Leilani doesn’t seem to miss her, which is very surprising to me, considering how much Leilani talks about cousins, and Oma, and Grandma, and other people she has not seen in a long time.

Maybe it is a blessing in disguise though that she left us, potty training and discipline are so much easier now that everyone watching Leilani is on the same boat, and Leilani made great progress doing puzzles in the last 2 weeks. We were also forced to organize our lives better, Leilani is on a much more reasonable schedule now, and last but not least we finally are checking out Auntie Joy’s toddler school (in Lihue, hello commute). While I wish very much that Leilani will be able to attend right now, she seems a little young… we’ll keep trying and report the progress.

Potty training is going great, although we went back to night-time diapers. We go everywhere (including Papayas :-) with her, have full day outings, and even start being confident on friends’ carpets. Her accidents usually are a few drops in the underpants and a distresses cry “I need potty”. Sometimes (when she’s having fun playing) we still need to remind her, when we notice her knees being presses together. She still makes us stop the car and goes by the side of the road sometimes (I think it’s a bit of manipulation, but who want to risk washing a car seat). The biggest issue is that she can’t really go on command, so in cases like these (excited or by the side of the road) she gets off the potty/toilet to wander around naked until she remembers she had to go.This happens mainly at the park, and I think is a relict of Maureen not ever putting her on the potty at the park

Saturday we went snorkeling at Tunnels (Haena), and later kayaking at Pinetrees in Hanalei. Leilani talked about going kayaking all day, since we had the kayak on the roof of the car. She loves to sit in front with Mommy while Andy gets his exercise paddling in back. She sits quitely and looks for fish, turtles and sharks (“Bruce” from the Nemo movie) but there were none to see in Hanalei Bay. The destination of the kayaking trip was to see the big sailboats anchored in the bay, the biggest being a two-masted wooden sailboat that we told her was Pippi’s (father’s) sailboat–it looks like an old boat, and we actually vaguely know its owner . We finished by watching part of the ocean film festival outdoor on the beach, Leilani lasted until 9:30pm (always hoping for another fish or turtle movie–there were enough to hold her attention, and she likes to watch surfing).

Julian was there with us, and patiently tried to teach Leilani gemetrical shapes, that he drew into the sand with a stick. A circle, a square and a triangle, then he asked her to stomp one of them. A few days later Leilani took a wooden spoon, raked a V on the carpet, and said: “Triangle. Stomp triangle…” We emailed that to Julian, with a subject lien “Impact” and the answer was:
> wow! ai in young lifeform.
> symbolic notation.
> wish we had computers that could do that.
> aloha
> julian 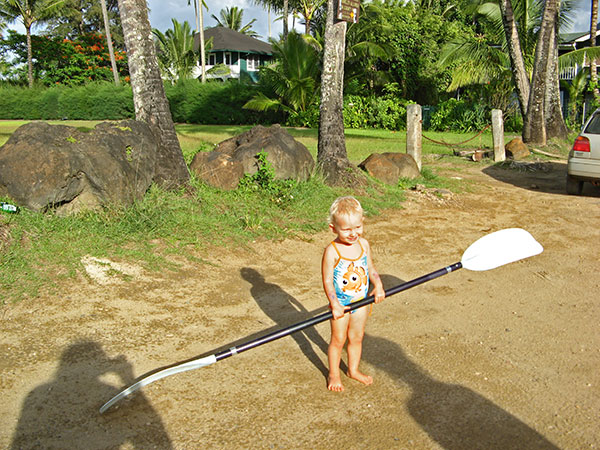 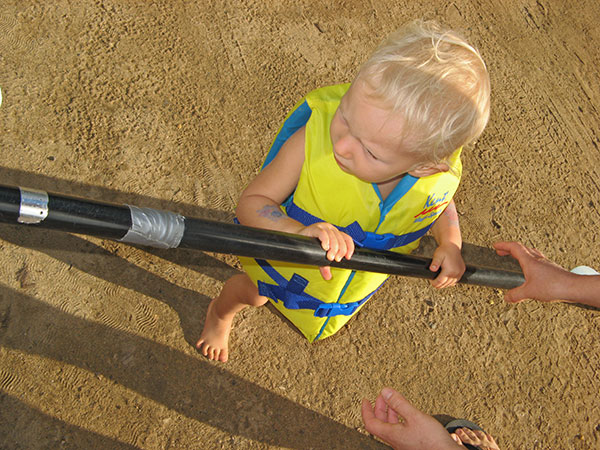 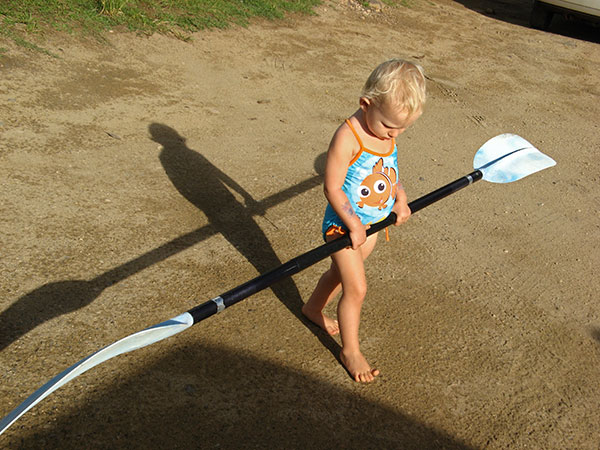 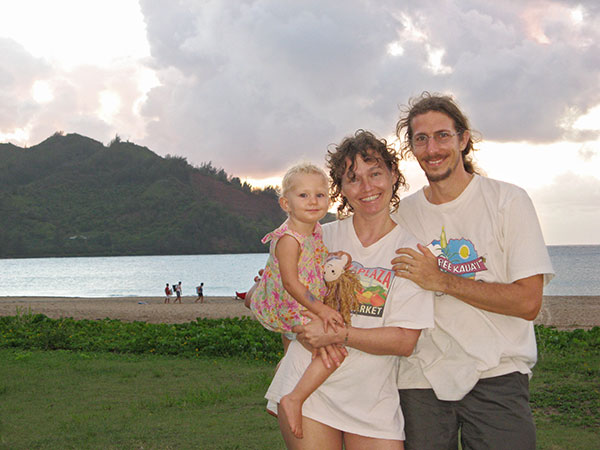 Sometimes when Leilani is really dirty she gets a bubblebath (keeps the bathtub clean :-) 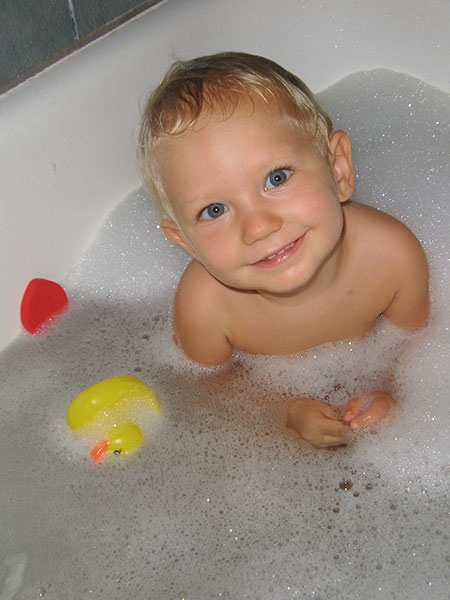 A few days ago we went to dinner with Cristophe – Leilani was playing with his daughter. 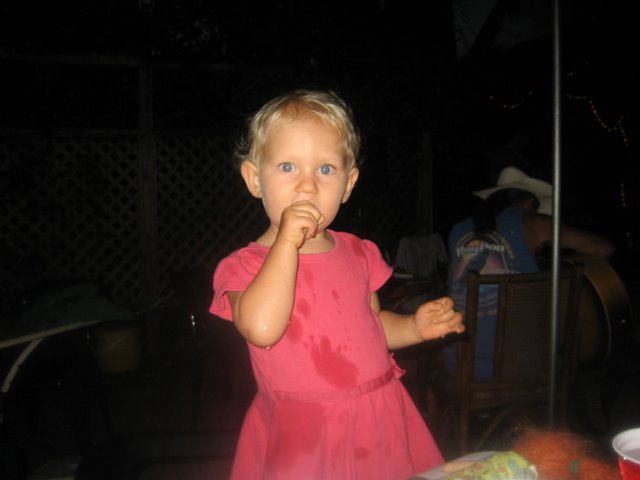 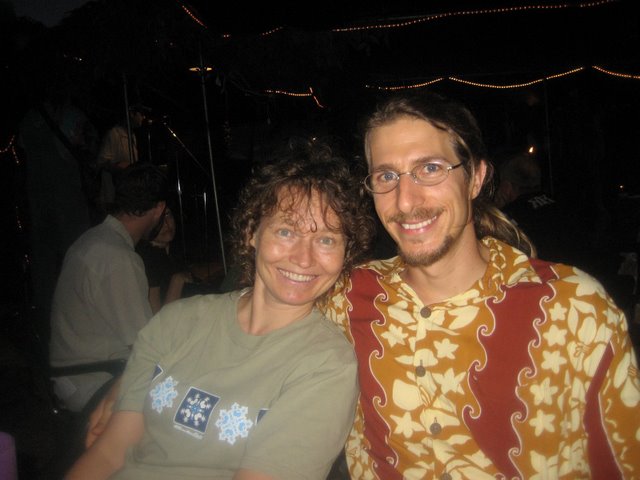 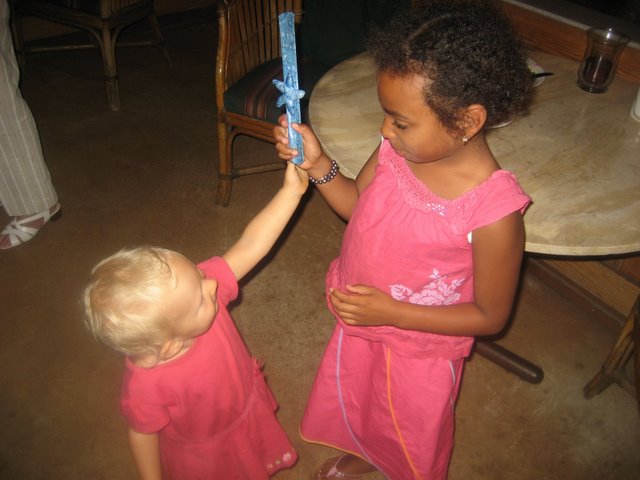 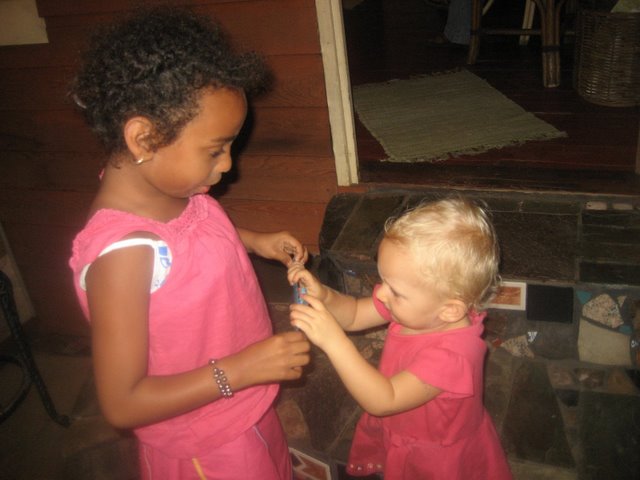 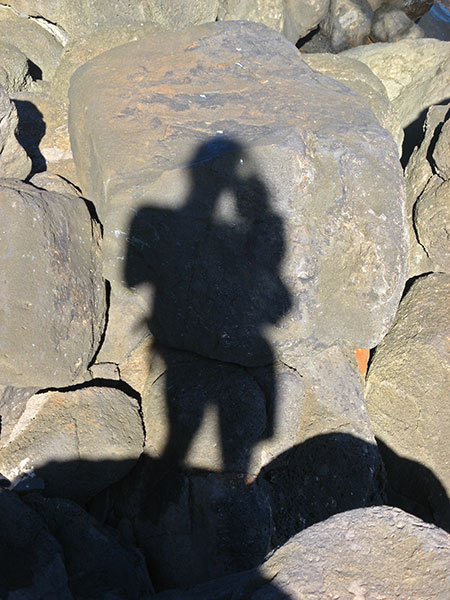 The place was site of the Hawaiian heiau, a Taoist temple, a Shinto shrine, and a Buddhist temple. 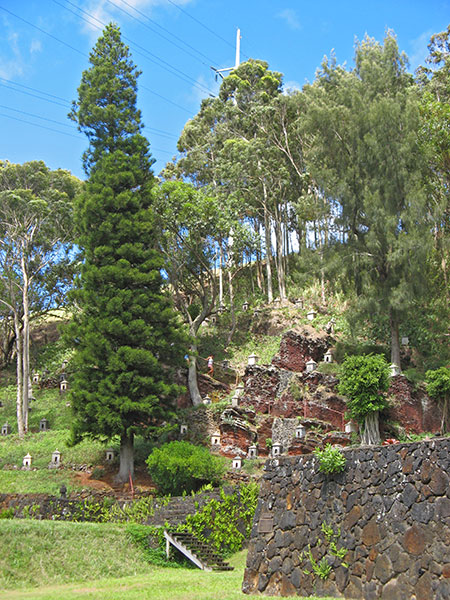 Leilani called the shrines Buddha houses, and peeked into most of them. 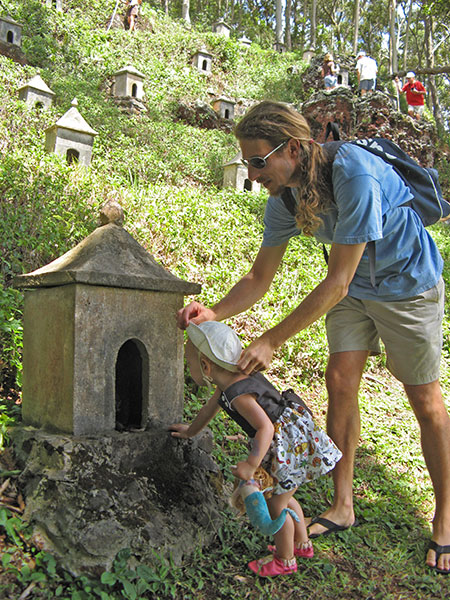 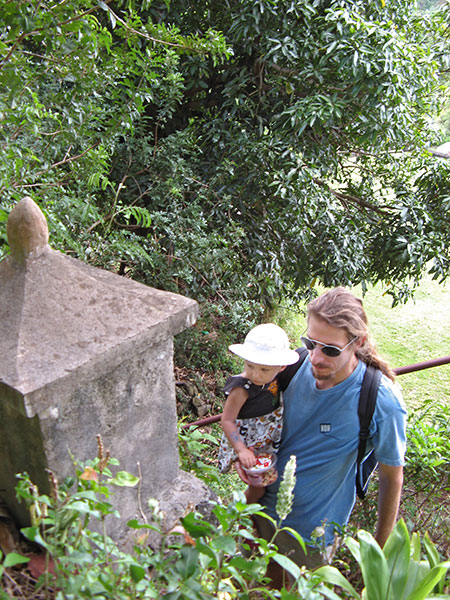 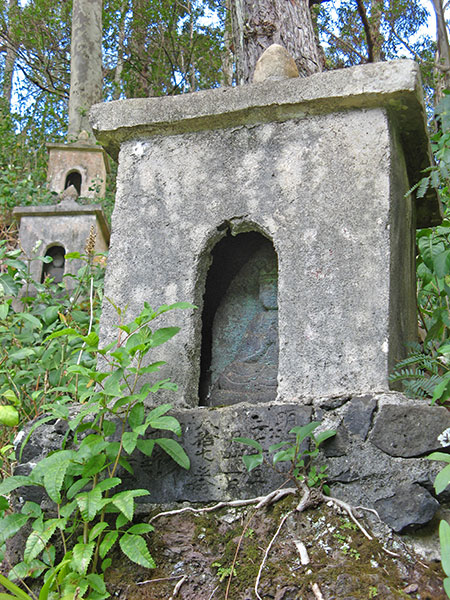 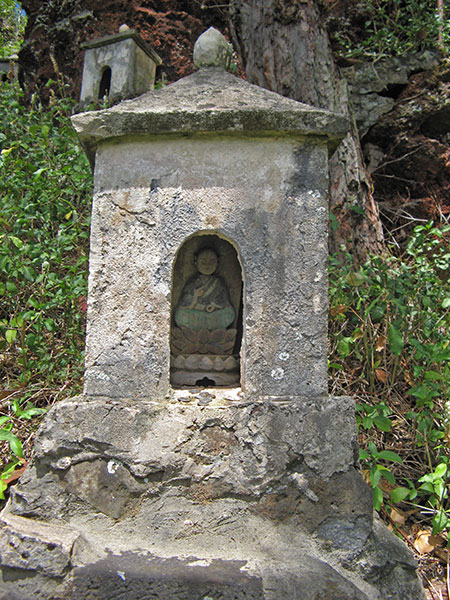 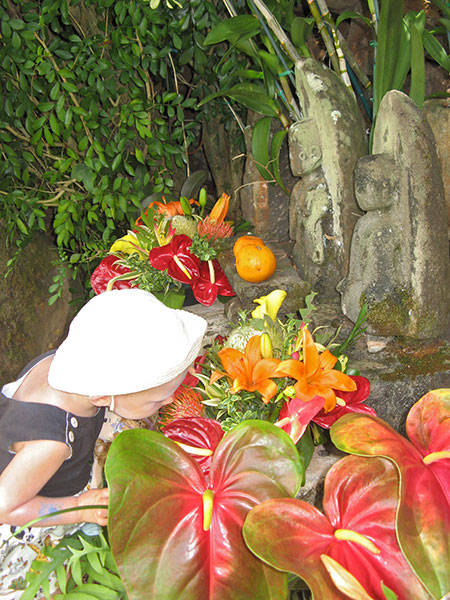 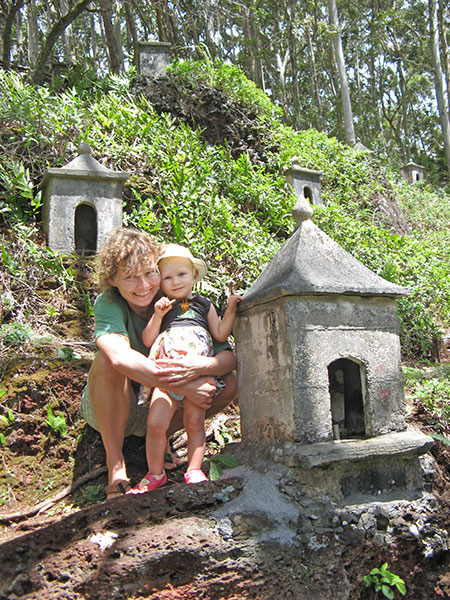 Leilani was really sick, started vomitting at 3am (still parts of her undigested dinner), and then every 15-30 minutes until 10am. She was awake until about 4:30, and then was so exhausted that she fell asleep as soon as one bout of sickness was over, slept for a few minutes, only to be woken up by another wave of nausea. Every little sip of water or milk came back up.

She got up at 7:30 or so, asked to go potty (she had been on the potty in the middle of the night too) and didn’t really have diarrea, just a little too soft. Later she was quite lethargic, and just dozed with open eyes in my arms.

We had called a nursing line earlier, and they told us not to go to the emergency room, but wait and see her pediatrician in the morning [Andy says: I wonder if they could tell that we were first-time parents–next time we probably won’t take her to the doctor unless she shows other signs]. We got a 10am appointment, and just before we left I found some homeopathic Nux Vomica, and gave that to her. Within minutes she started talking and smiling again, threw up one last time, but in the doctor’s office she was fine and happy, playing, demanding books and commenting on the pictures there.

Needless to say he found her totally healthy and send us home with the recommendation not to get the prescription he had given us just in case. We did suggest that maybe the sugar in the homeopathic pills had something to do with Leilani’s improvement, but maybe that was just for the doctor’s benefit.

We had promissed her an airplane book or stickers, so we went to Borders, and waited for 1/2 hour (spent 50$ but got an airplane book, a sticker book, a coloring book and 2 huge books on animals). When the pizza place next door opened Andy went and ordered pizza, and that’s all Leilani talked about the last 15 minutes at Borders. She ate an entire slice of a large pizza (according to Weightwatchers 6 points, 300 or so calories) and part of another one. We briefly panicked when she burped, but she was fine. She fell asleep in the car and did not wake up when we put her in the bed.

P.S. Even though we did have a diaper on her today, it stayed dry and clean through all the sickness, and yesterday there were no accidents at all either (and no diapers).

Today – 7/21 – was Rowen’s first birthday party. Our cameras seem to have problems on most birthday parties… this time I depleted the batteries beforehand, but at least we managed 2 photos. 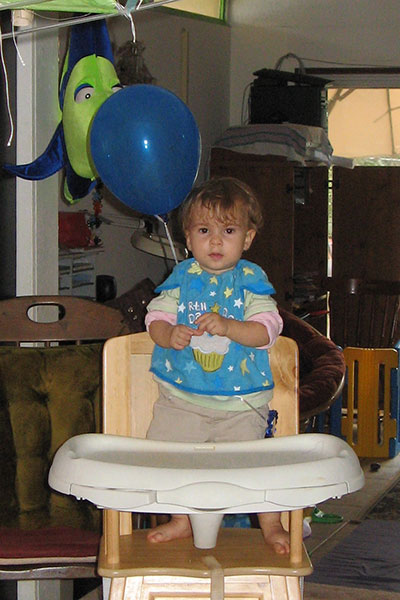 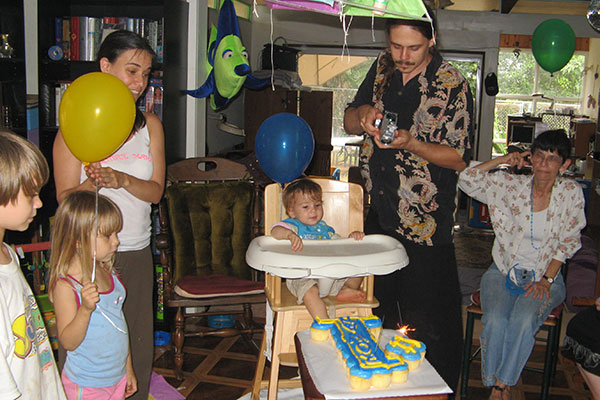 We still have nice sunrises here, and Andy still has to get up early. 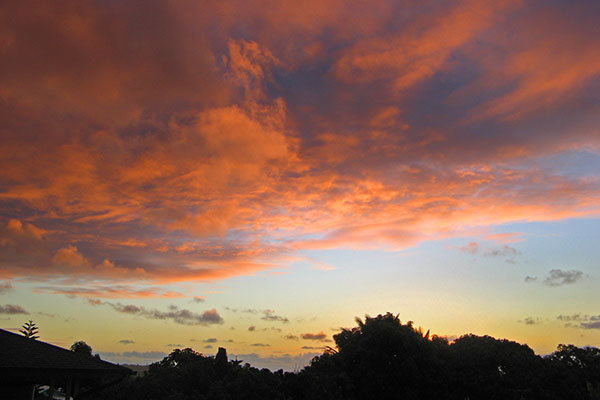 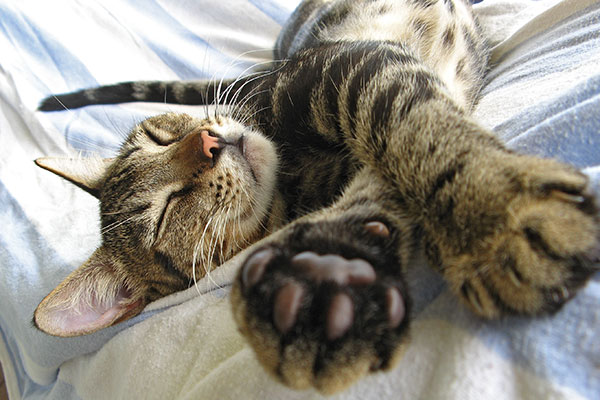 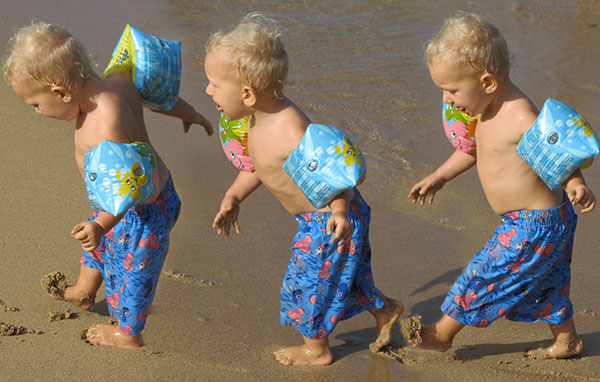 I need to watch what I say in front of Leilani… when looking at a few similar photos of Leilani walking with me (from the back, with half the upper body cut off) I remarked, to Andy or myself “Who’s that fat lady walking with Leilani?” Leilani cheerfully replied “Mommy!” 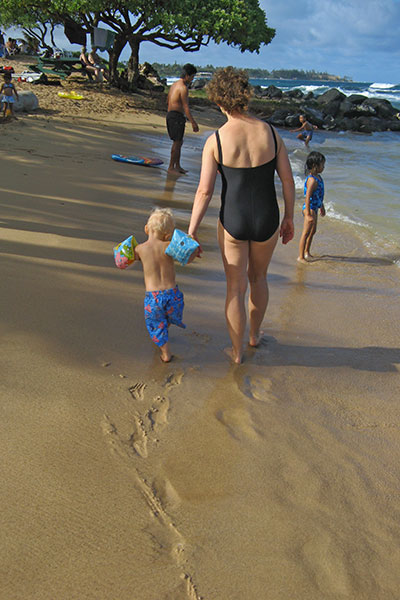 We are making the first attempt to really potty train Leilani. We want to try for at least 14 days and then re-evaluate. Since last Friday – 8 days ago – we don’t use daytime diapers anymore. The only exceptions were today at the birthday party, and yesterday for a short time as punishment for refusing to sit on the toilet (lose underpants privilege!) – both stayed dry though.

Most of the night time diaper stayed dry too, but she does have (peeing) accidents – the first day twice on the carpet, once at Walmart, once in front of Papayas (took me 5 minutes to get the restroom key), every time Aunty Maureen took care of her (we sent Maureen on a vacation now).

She thinks as soon as she is naked she can pee everywhere outside, and I have not really discouraged this. Depending on whom she watched recently she squats, stands against a tree or lifts her leg :-)

Most of her recent accidents are not full pees, she stops herself and runs for the bathroom or asks to be taken there where she then finishes.

We has a severe Mommy malfunction too, I had some cleaning to do and parked Leilani in front of the computer. After a few minutes I saw her walk out the room, usually she stays glued to the screen when Pippi is on, but I couldn’t let go that very moment. A couple minutes later I heard a pretty distressed call for help from the bathroom – I ran in, and Leilani had managed to take the panties off (but only after they were wet), put the kiddie seat on top off the toilet (wrong direction though), but couldn’t get up. At least now I know the most compelling argument for waiting with the potty training… it’s easier when they can do these things by themselves already…

The Star<br>A fresh perspective on things.

Wham! A rock thrown up by a lawnmower slammed into our windshield. A little crack formed, right at eye-level on the driverside, and Andy and I started to lament and complain unhappily. My thoughts about stopping, confronting the guy and trying to make his insurance pay got interrupted…

“A star! A star!” Leilani called out from the backseat. I looked again. The crack looked indeed like a star. When Leilani started singing “Twinkle twinkle little star how I wonder what you are…” the rest of my anger melted away.