Maybe fear is the key. The Dr Sears “The Discipline Book” has a good section on how to help toddlers to be safe around traffic, by letting the young toddler play in the driveway (while watching him extremely closely) and showing strong, even over-acted emotions, especially fear when s/he is going close to the road (screaming, grimacing, carrying him away).

For us something totally different worked to get even stronger fear, Leilani is deadly afraid of traffic.

We live in a quiet neighborhood with very little traffic, but her beloved kitten Kiko was ran over after she just had it for 3 months – she saw the body, saw my grief including tears, the “funeral” and heard the explanation “He played in the road, a car ran over him” hundreds of times (we did read “Cat Heaven” probably hundreds of times too)

While at the time we were very worried about traumatizing Leilani, who was only 19 months old, and we still are sad about loosing the kitten, the results now are a blessing (thank you Kiko).

We can walk at the quiet street without holding hands, when Leilani hears a car (still 2 blocks away) she comes running to me and I need to hold her until it is past. On busy streets and when crossing she wants to be carried. I have a feeling that this created a totally thoroughly lasting impression, and we’ll have a lot less traffic worries than other parents.

I noticed there were a lot of posts without photos of the star of the blog. That must change

Leilani in the swing, on Oma’s last day here 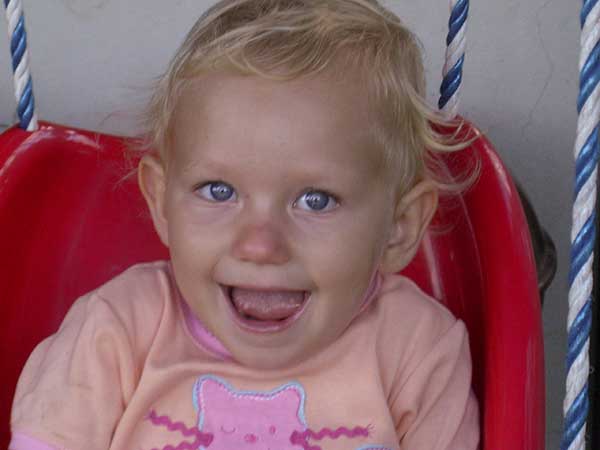 It’s Halloween (almost) Thanks Grandma for the costume 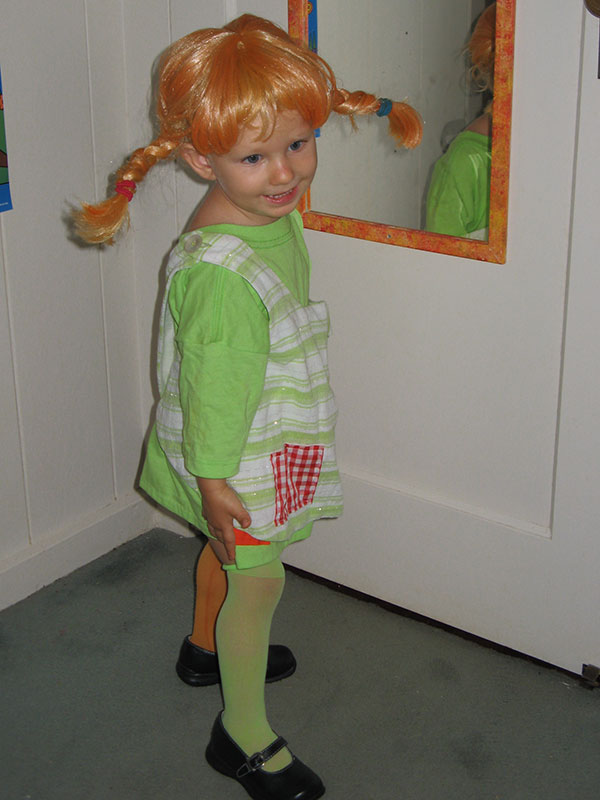 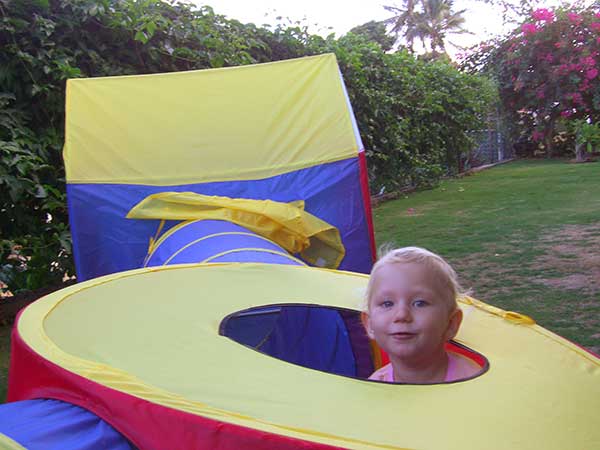 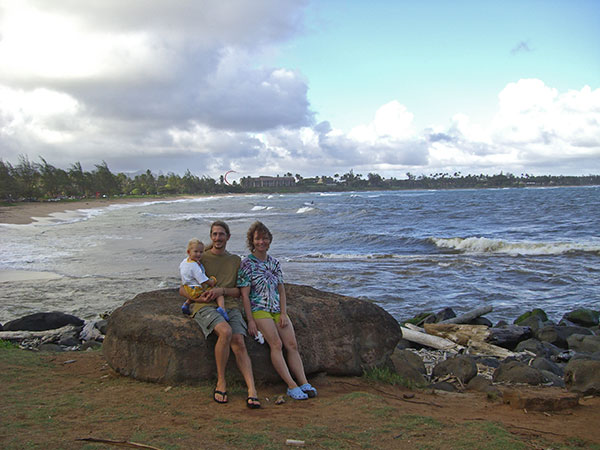 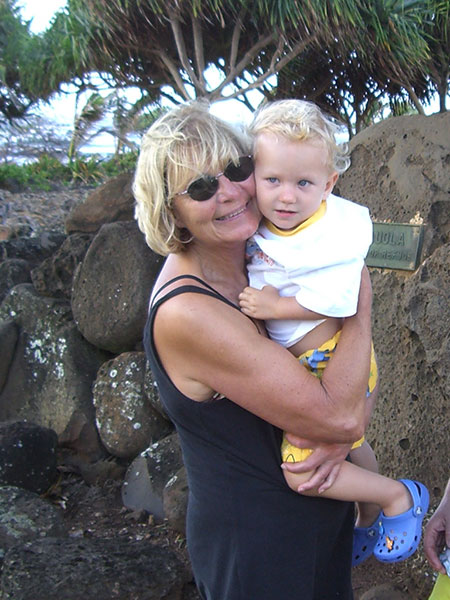 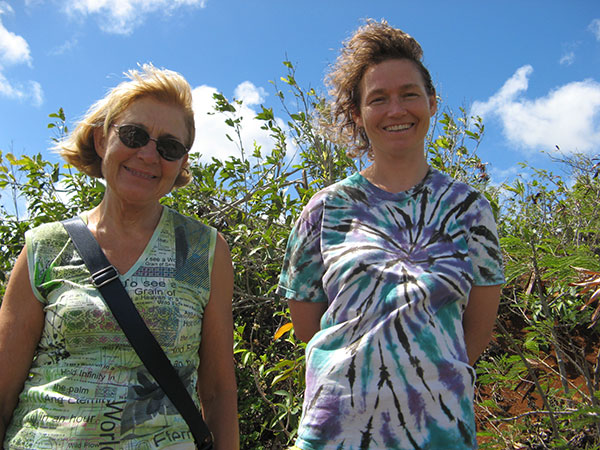 Mom planted these while she was here the last time. In the meantime we harvested and ate that bunch – some are still frozen, waiting to be a smoothie 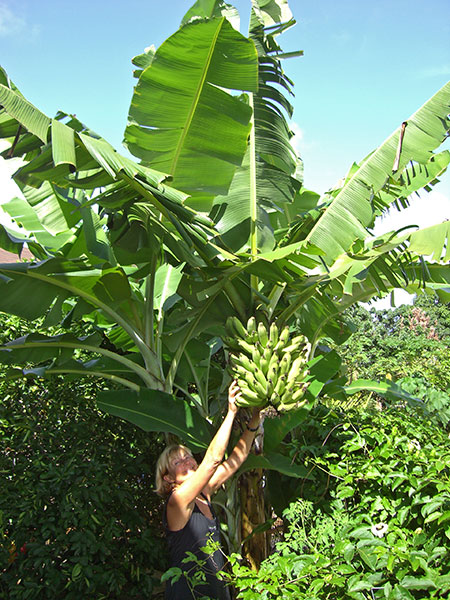 Every year we meet Lisa’s parents Donna and Wolfgang, who have a timeshare here for Wolfgang’s birthday 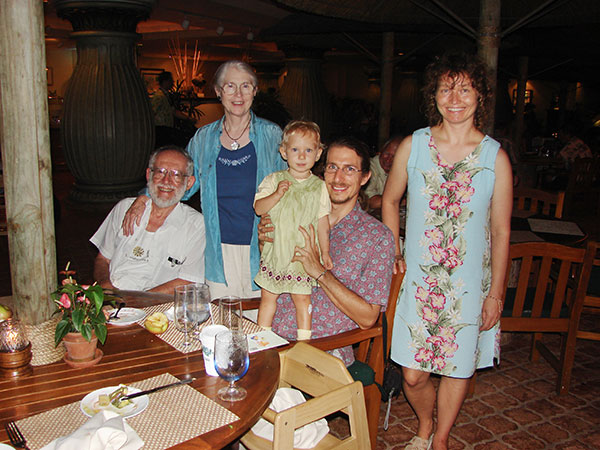 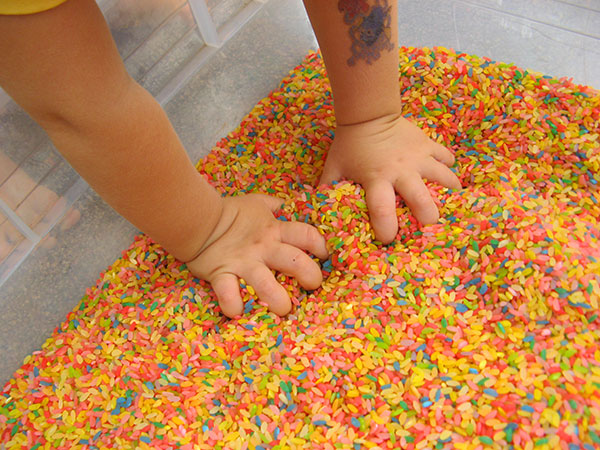 Tutu and Me is a free preschool prep program that Leilani and I attend. Free means the federal goverment and other sponsors are paying a lot – and want to see results. Literacy is one of them.

They have a library of a lot of kids books, unfortunately they do not select them for quality, some of the worst kid’s books I have ever seen are there too (Can I Bring My Pterodactyl to School, Ms. Johnson? ** and a lot of books where people are drawn as pigs).

Some are nice books though. Whenever you borrow one of them you are asked to have the child retell the story and write it down, so their “sponsors” know that the money is spend in a good place. I tell Leilani that’s her homework.

So we brought home “Smiley Shark” – which is just one notch above the Pterodactyl, but Leilani loves sharks. It’s fun to read, “Far away in the deep rolling ocean lived Smiley Shark. Smiley Shark longed to dip and dive, jiggle and jive, dart and dash with a splish and a splash with all the other fish…” I read the story twice, and Andy probably read it too, and when Leilani retold it I was surprised to see she had missed the point of the book – Smiley Shark is a nice guy and just wants to play with the other fish, but they are so afraid, only when he saves them from a fisherman do they start trusting him and become friends and all are smiling together. That’s a pretty dumb story, maybe that’s why Leilani didn’t understand it. She knows, sharks are dangerous and eat fish.

So that’s how she told the story, looking at the pictures

Eating, fishes eatin, swimming scaring fish. I am scaring fish. Splashing fish splashing other fish. Shark playing with angelfish. Shark eating, fish eating, angelfish eating (not even prompting got her to say he only wanted to play – which according to the words and the pictures of his friendly face with the big smile he did – anyway, angelfish darted off, and puffer on the next page was blowing bubbles and pricked Smiley in the nose.)
Blowing bubbles pufferfish. Pop on the nose. What is that? Am shark. Shark eating starfish, pufferfish, fishi. (no, he just wanted to play… but I stopped the prompting.) Fins. Jellyfish. Two jellyfish. One two three Jellyfish (well one of the three was an octopus…) Octopus. Fishingboat. Going in net. Have eat in mouth (???) Going in net. Shark! Shark! Shark eating! Shark flying. (Shark jumps out and scares the fisherman). Fisherman out. Fishes going outside too. Going outside this one. Octopus. (On the last page there were all the fish playing together with the shark, smiling, and the text said they were all friends, and even though I tried to get Leilani to say that she would not comment on that page beyond the word octopus.)

* Just because I know people are going to ask me why I think this book is ridiculously stupid, here a quote: “If I brought my Pterodactyl to school and there was a blizzard and our classroom was freezing (even though Franklin Elementary’s furnance was working hard) and we were all turning blue with everyone’s teeth chattering nonstop, my Pterodactyl could wrap his wings around us. All of us. Around you too Ms Johnson. Then we’d be comfy warm. (My Pterodactyl would be the COZIEST SNUGGLIEST blanket Ever)”

I mean – books are supposed to make kids smarter not dumb them down.

(German for The Boat). Leilani was playing in the bathtub yesteday, put her squirty fish into a bowl full of water and told me it was the “Fishi’s nest”, then dumped out the water, put the fish back in and let it sail on the surface, and called it “The boat”.

Articles are the latest grammar structure that Leilani started to integrate. German ones are a bit harder, there are six to start with and they change depending on the case the noun is in, so I was surprised to hear the first article in German.

Her longest sentences now are up to 8 words, and she really likes us to read a kid’s dictionary to her. One of her favorite phrases is “Mommy what’s that?”, she rarely asks any other (“how, why, who, when”) questions at the moment. Her favorite songs she sings herself are “Twinkle twinkle little star” and “Heile Heile Segen” she also sings a few words of Heidi (in German below, not yet in French) and a few others, sometimes she will hum a melody too.

On the last day we left early, drove to Hilo with a little sightseeing and shopping along the way, and went on an Island Hoppers airplane ride with our pilot Dale. First my mom and I flew while Andy stayed with Leilani, then Andy went with two other tourists. When he came back Leilani happily called out “My turn” and was really dissappointed when she couldn’t go. 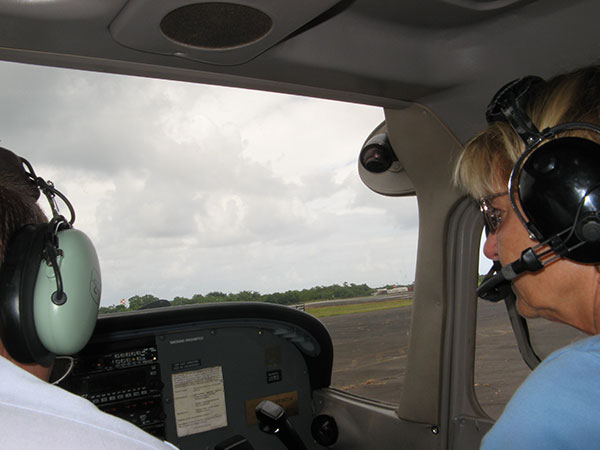 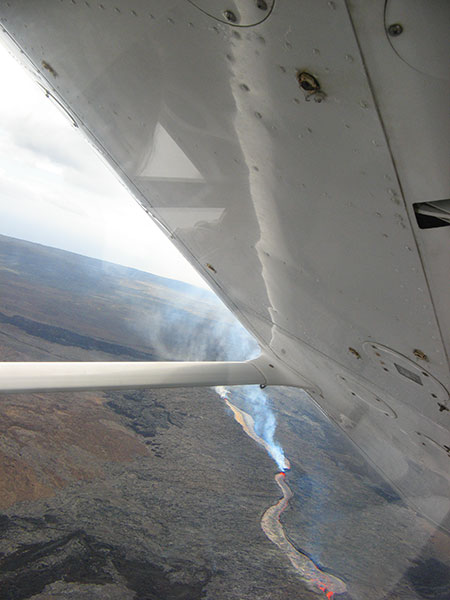 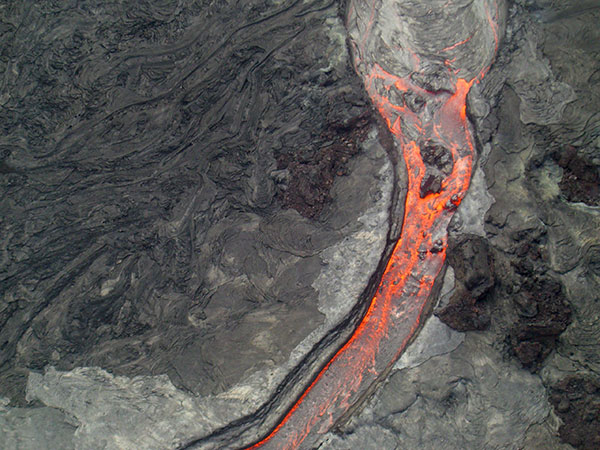 The mighty Pu’u O’o which no longer has lava now that it flows out elsewhere: 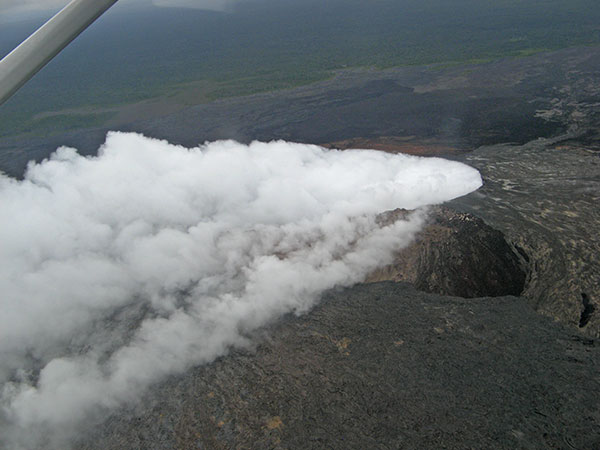 The Royal Gardens subdivision that was cut off and partially covered by lava in the 1990’s (see maps of past and current flows): 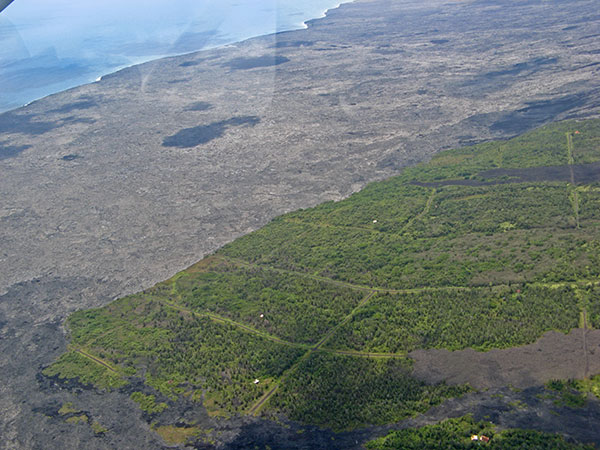 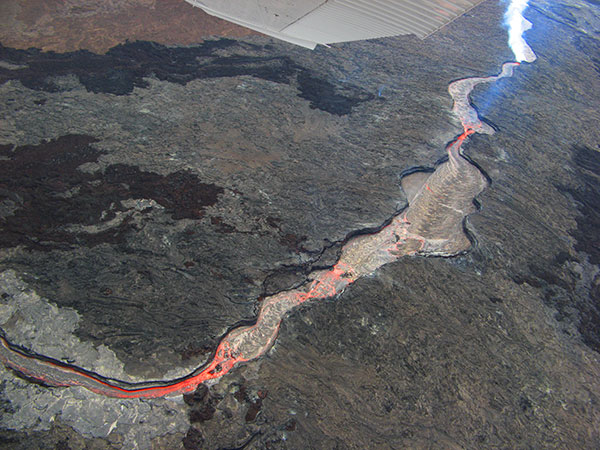 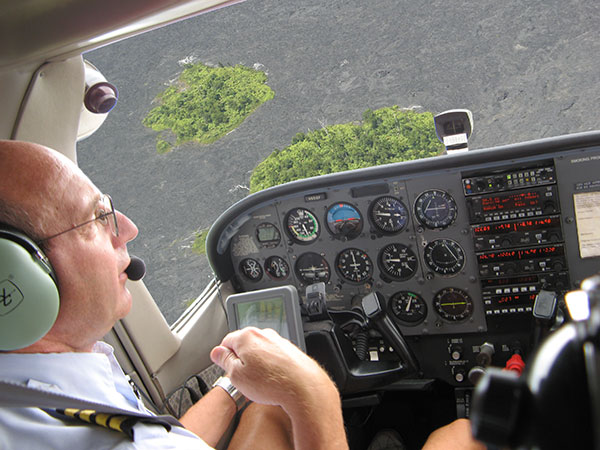 Andy says: you did too do that…in photoshop!

I suppose this is called a “lavafall:” 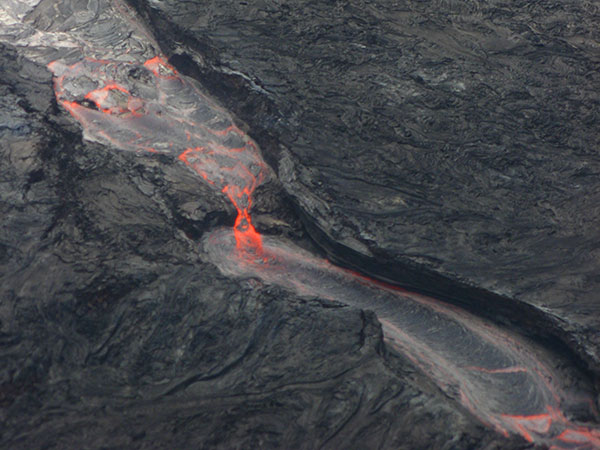 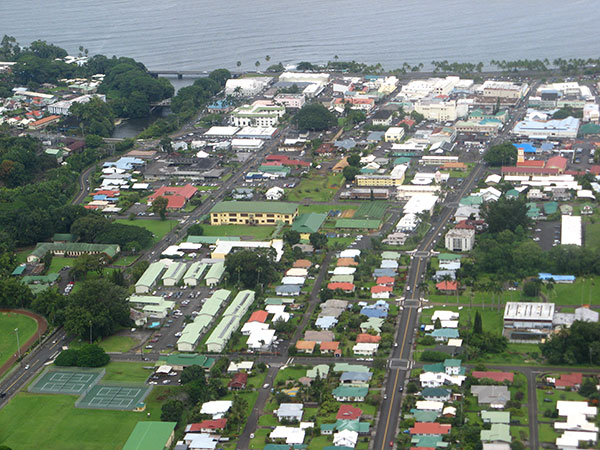 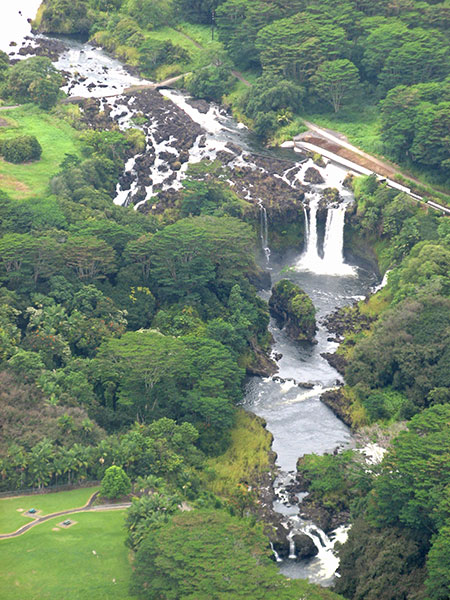 …that we decided to see them again from the ground: 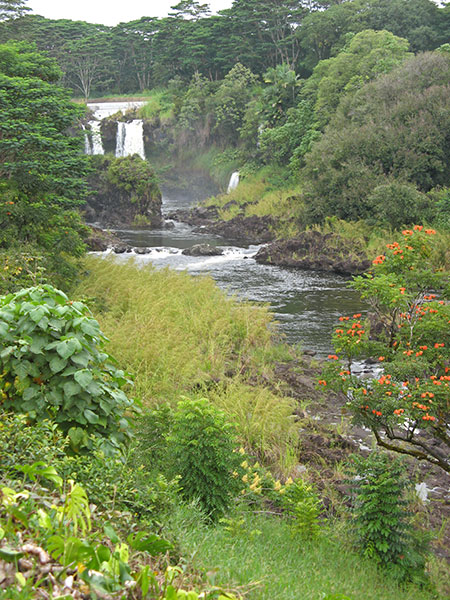 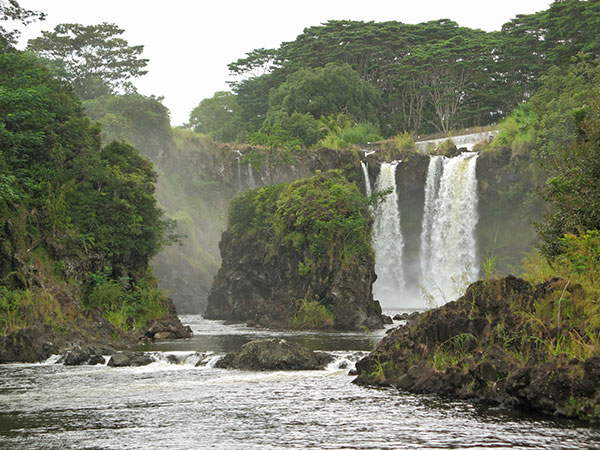 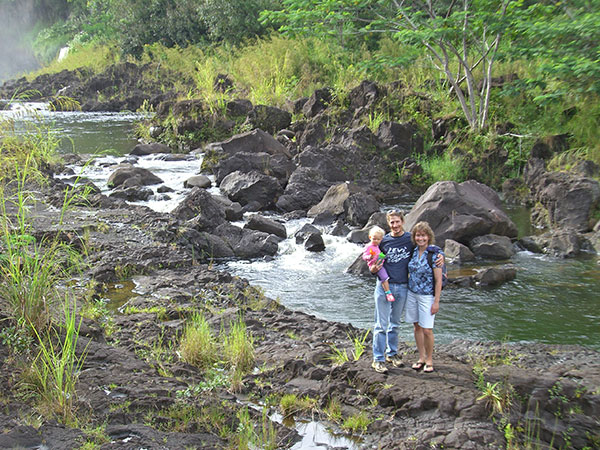