10 days and 500 photos later, we’re back from lovely-as-ever Kaua’i. After sorting, there will probably be only 200 photos to keep, and Sonja will probably find dozens to post.

In the meantime, we’re having a quiet weekend cleaning up at home. Leilani was getting dressed this morning, which means putting on the same shorts and t-shirt as yesterday and picking out a new dress (because yesterday’s had spinach on it already). The first pink dress she pulled out had been used for painting, so now it’s a crafts apron. Then she got out her pink, red, and orange Hawaiian-print dress to wear. At the same time, another pretty dress fell off the hanger, and I suggested that one.

“No, it’s too Eastery,” she replied, and she was right. It was light pink, yellow and very flowery. I asked Sonja if she had ever called her dresses that, and she said no. I know I have probably said some dress looks like an Easter dress, but that was long ago. In any case, Leilani picked up on the meaning perfectly.

Later at breakfast, Leilani and Sonja had Trader Joe’s probiotic strawberry smoothies. These come in little bottles, and I had Leilani shake hers before opening. After taking the first sip of the now-frothy drink, she said “it’s like beer for kids.” Again, the similarities are many when you think about it, probably more than she’s aware of: cultured, sugar/alcohol, curved bottle, etc.

Finally, Sonja and Leilani were getting ready to go to 24-Hour Fitness. The best part of this gym for Sonja is that they have nearly-free childcare most days of the week. And the child care room is a great playground for the kids, with climbing and sliding, coloring, and TV, which is probably why Leilani likes it so much (we’ve asked the care-givers to drag her away from the TV if she watches too much). The 24-Hour Fitness is in the same plaza as Leilani’s Little Gym, so we’ve taken to calling it the Big Gym. And I always thought the children’s area in the Big Gym was called the Jungle Gym, which seemed to be a clever name by this corporate chain that thinks of all these little details. I learned today that Leilani made up the name Jungle Gym one of the first times she went, and it’s just what we call it in our family now.

Friday we went to SF again. We started out in Chinatown, walked a long way, bought some gifts and a lot of tea, had a vegetarian lunch and then walked even more to the Cable Car Museum. Leilani admired the big wheels, but was not too impressed. 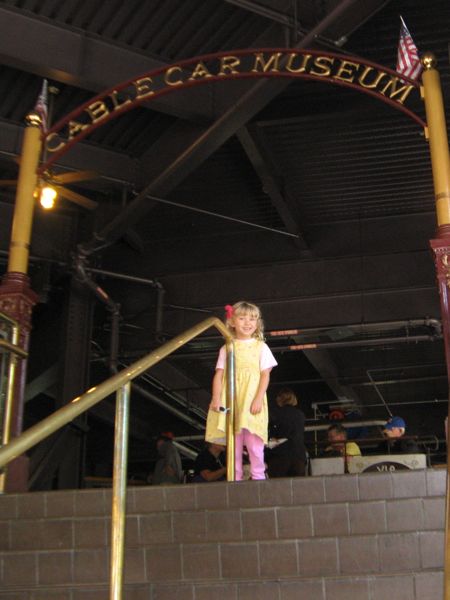 We then took the cable car all the way to Market street, and walked another mile or so to the Asian Art Museum. My iPhone ran out of “iPhonejuice”, just quit on me and I was lucky to find the museum. I don’t really like to ask for directions, but I remembered it was right next to the city hall. 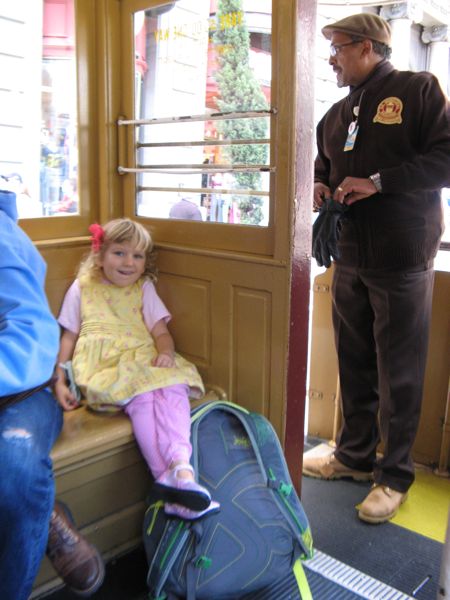 Leilani really liked the puppets. We took a guided tour about the development of pottery, but Leilani was thoroughly uninterested, it was too scientific. One exception was, when she heard that the Chinese had also put things into the grave for the afterlife. She asked about mummies, and was disappointed at the answer. (Even though the docent tried to point out some similarities with ancient Egypt) 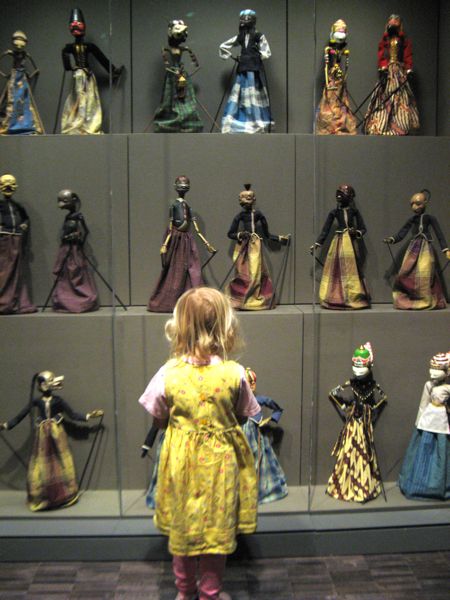 We got to make our own art too. 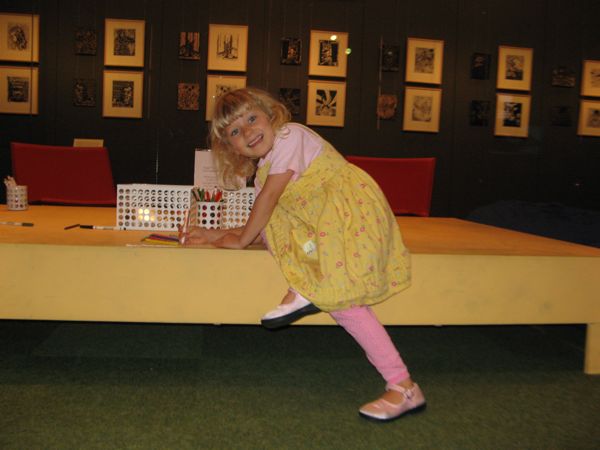 That was right in front of the gift store. I need to remember not to go to museum gift stores, at least not with Leilani. 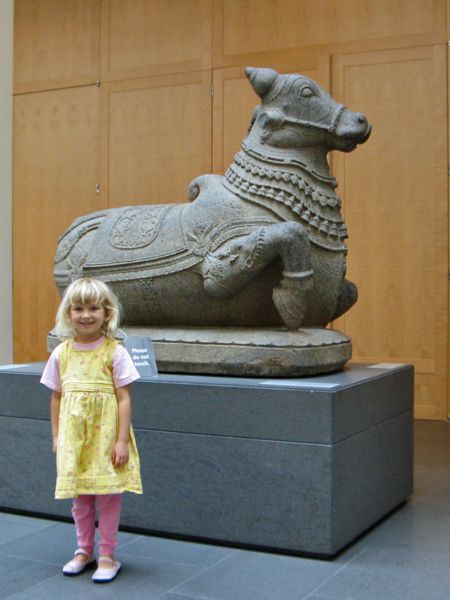 Leilani was really interested in fabrics and I got to see all of the Himalayas and we stayed until it closed, and then we played right next door and then walked to the Bartstation to call Andy (who had the car) to pick us up. 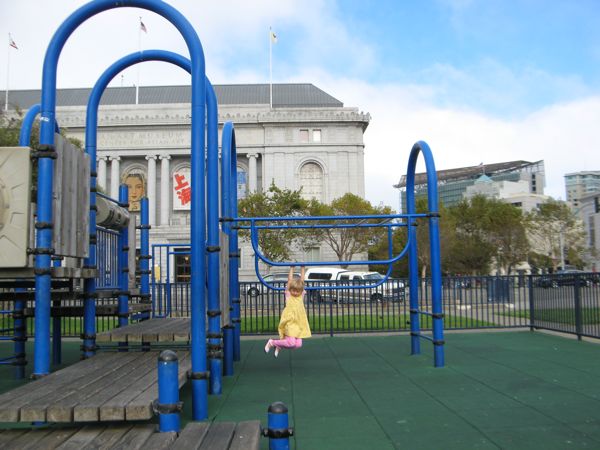 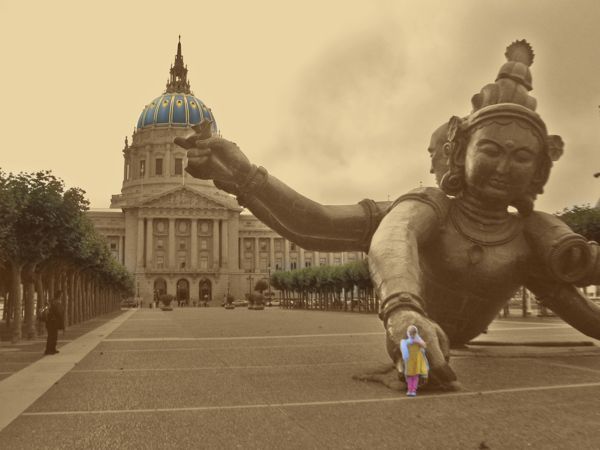 We went shopping at Blick Art Supplies, at Rainbow, and dined at the Cha-Ya Vegetarian Japanese Restaurant in the Mission.

Now… This time we are really current.

OK, I found a few more forgotten photos. But this time I had Andy QA it.

And here is the rest:
We have an almost tame squirrel living next to our house. Leilani feeds it with nuts and almonds 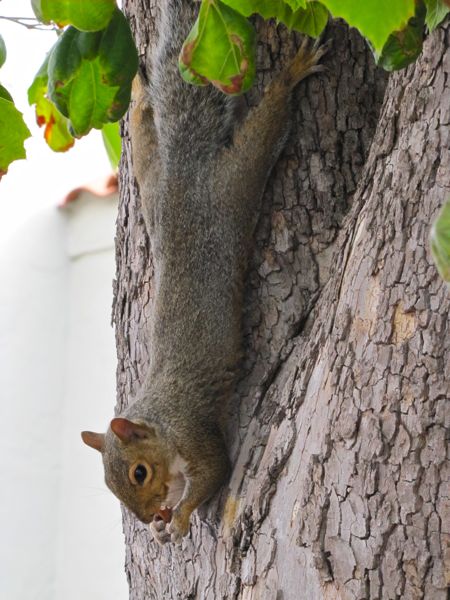 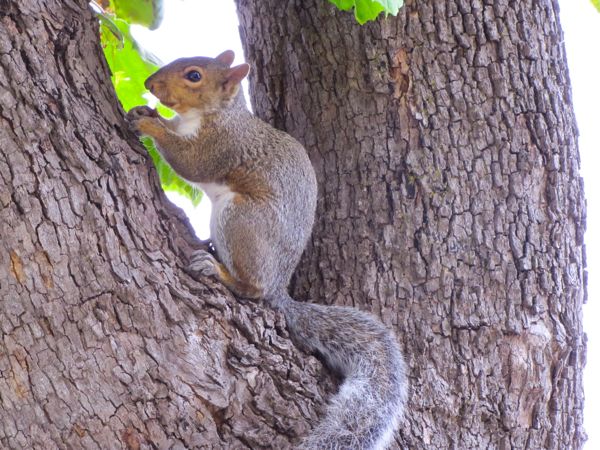 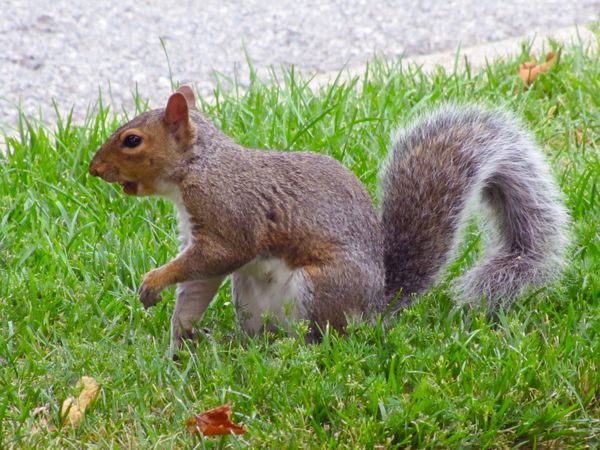 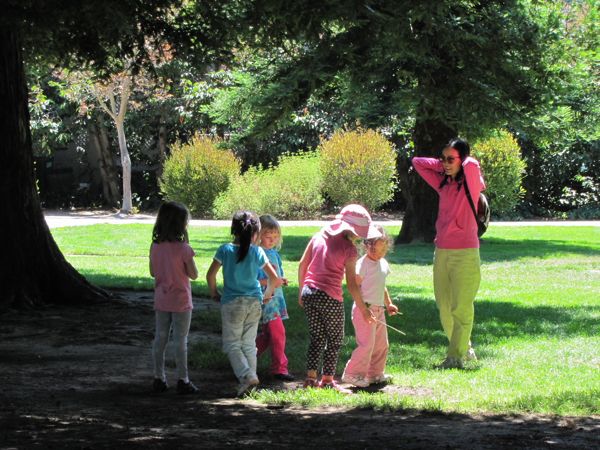 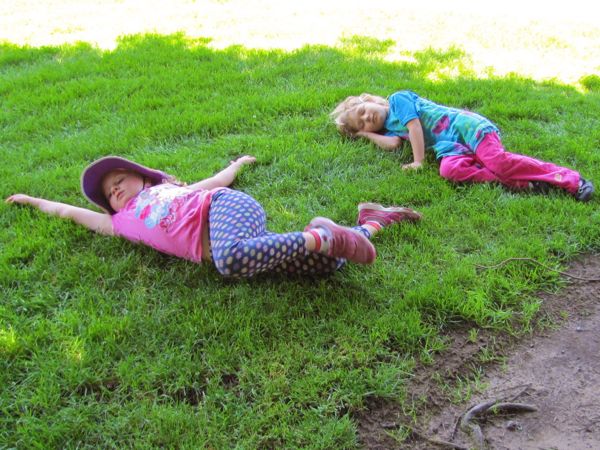 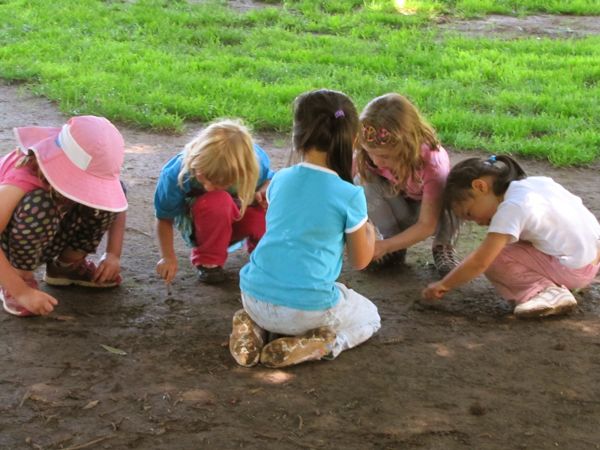 Leilani and I went to visit the Rosicrucian Egyptian Museum in San Jose. First we looked at the garden, sphinxes, obelisks and a statue of Cesar among many other interesting things and plants. 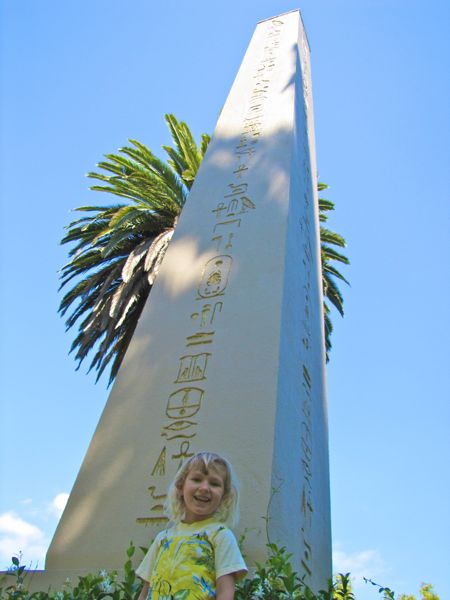 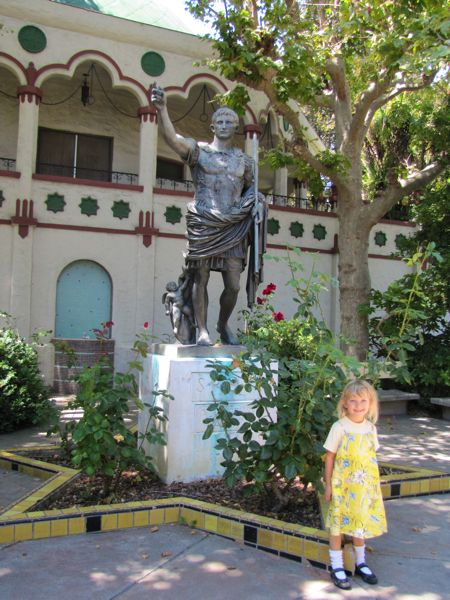 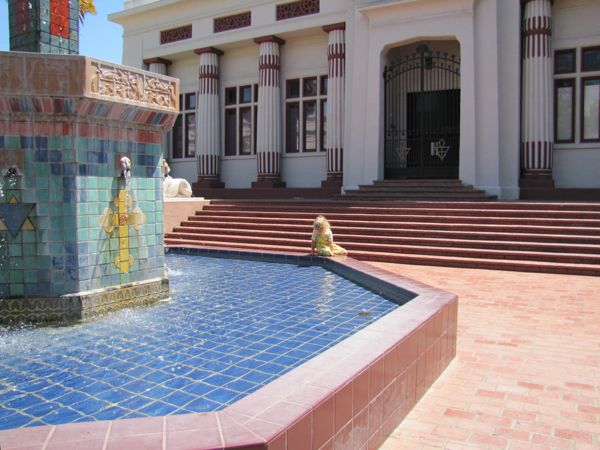 The museum is beautiful from the outside 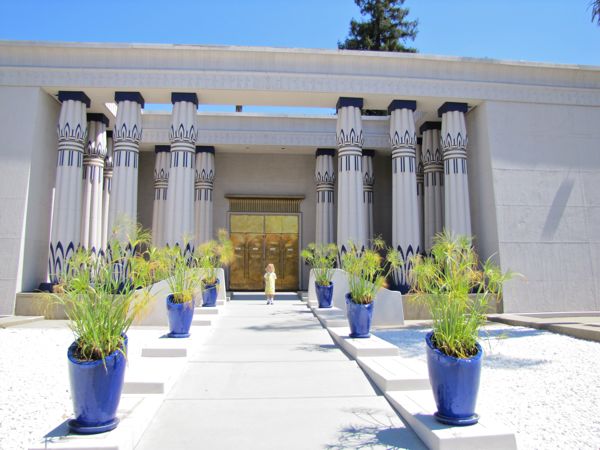 Leilani really enjoyed it and we stayed almost 2 hours 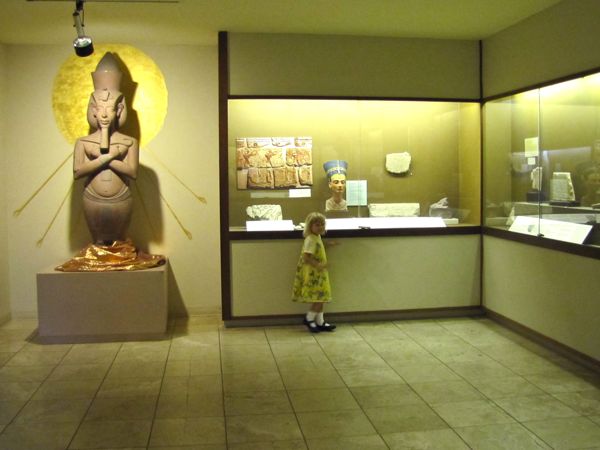 For our picnic lunch we sat right next to the peace garden and then Leilani played at the pond for a little while. We went to the planetarium, but that was rather boring and we left a few minutes before it was over. There were 2 beautiful dragonflies, I managed to snap a picture with the iphone 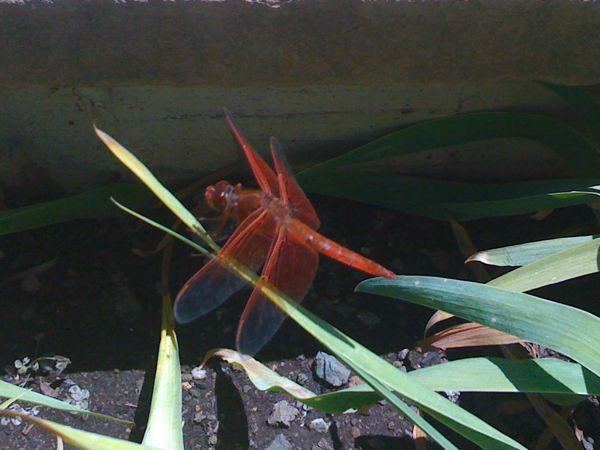 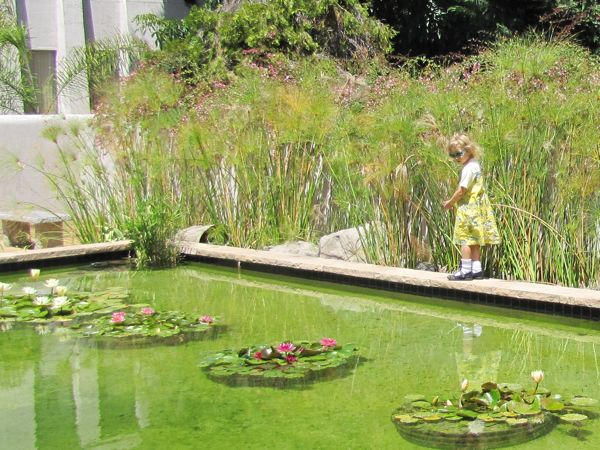 We went back and took a guided tour into the tomb – Leilani was really scared at first, but then said the tour had been her favorite thing. 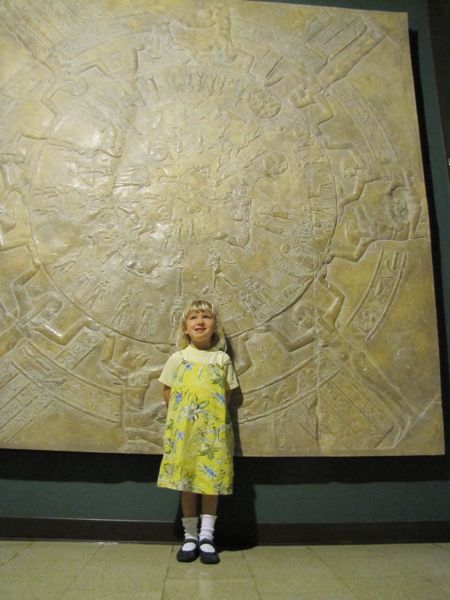 We drove to the Winchester Mystery House and walked around in the gardens before taking another one hour tour. As soon as the guide said to raise the hand if we had any questions Leilani did. Her first – of many – question was “How did Ms Winchester die?” (Old age, Leilani seemed disappointed, the audience suggested a gunshot…) Leilani was the youngest – there were a few young teenagers, mostly adults, Leilani had to stay next to the guide all the time, and be the first through every door sometimes before the guide… The guide was not really annoyed, but slightly surprised, more so that Leilani kept it up for the entire tour. She told me she had never before seen a kid “stay with the tour” for more than 20 minutes, often the parents had to leave… 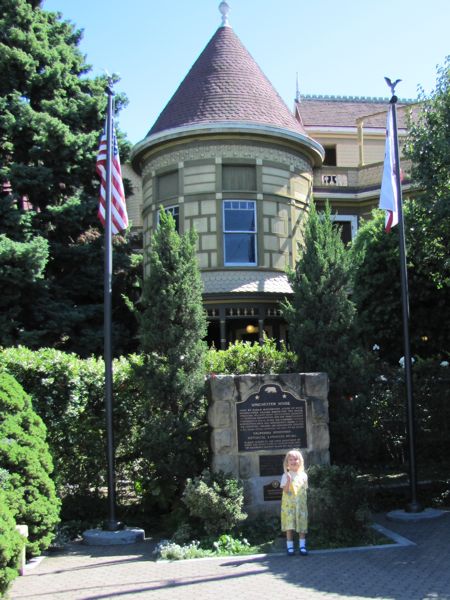 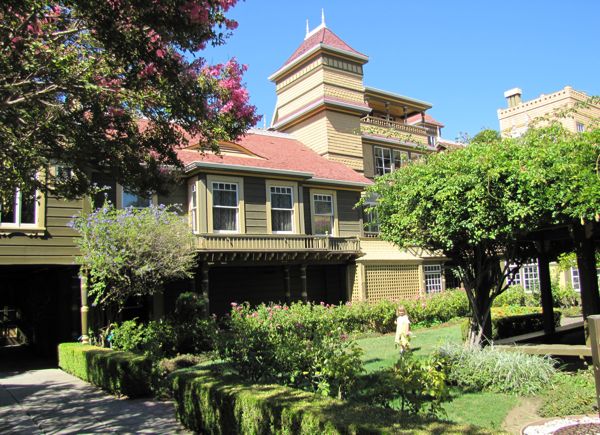 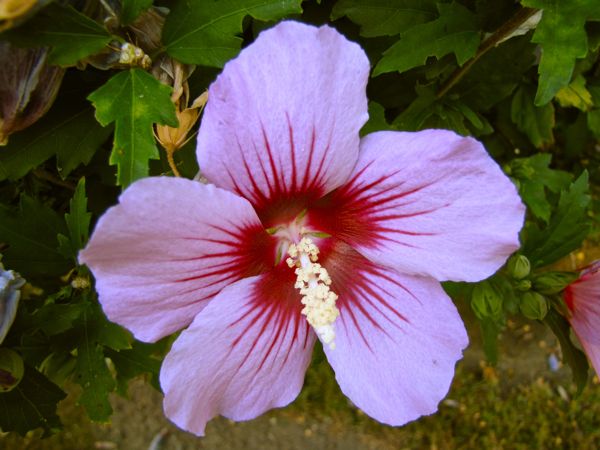 We ended the day at the beautiful and solar-panel thatched Vegetarian House and rolled ourselves a lot of fake fish spring rolls, and also ate heavenly salad. 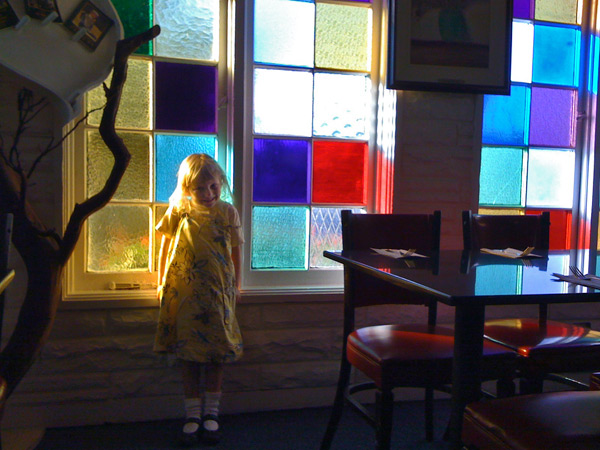 Two things have happened for the first time on this blog: I am up-to-date with all photos (I might have one or 2 photos on one of the cameras) and I made 35 posts this month—and it is not even halfway over (2nd strongest month ever was June when I had started to catch up, and July still had 24 posts).

I’ll put a few movies up in the next days and then hopefully stay current. I have been managing that well with my email inbox lately…